Crispus Attucks (circa 1723 – March 5, 1770) was the first person to die in the Boston Massacre. This made him the first American to die in the American Revolutionary War. After being killed at the Boston Massacre, Attucks became a martyr of the American Revolution. He also became a symbol for the abolitionist (anti-slavery) movement, both in the 18th century and the 19th century.

Attucks had a big impact on important historical events like the American Revolution and the abolitionist movement. However, he continues to have an impact on American culture today. Even 250 years after his death, modern songs, stories, and television shows still talk about Attucks. Children go to schools that are named after him. In 2002, Attucks was named one of the "100 Greatest African Americans" in United States History.

Aside from how he died, historians do not know much about Attucks' life. His father, Prince Yonger, was a slave who had been born in Africa; his mother, Nancy Attucks, was a Wampanoag Native American. One of Crispus Attucks' ancestors was John Attucks of Massachusetts, who was hanged during King Philip's War.

Attucks may have worked as a dockworker or a merchant seaman. He definitely became a sailor and spent most of the rest of his life at sea. He often worked on whalers, which involved long trips at sea. Many historians also believe that he went by the alias "Michael Johnson" in order to avoid being caught and sent back to slavery. He may only have been temporarily in Boston in early 1770, having recently returned from a voyage to the Bahamas. He was due to leave shortly afterwards on a ship for North Carolina.

John Adams successfully argued that most of the accused British soldiers fired their guns in self-defense. He got all but two of the soldiers acquitted of murder (found not guilty). Two of the soldiers were found guilty of manslaughter. They were punished by being branded (burned) on their thumbs. While defending the British soldiers, Adams called the crowd "a motley rabble of saucy boys, negros and molattoes, Irish teagues and outlandish Jack Tarrs." In particular, he accused Attucks of having decided "to be the hero of the night," and of having started a conflict with his "mad behavior."

The five people killed in the Massacre were buried as heroes in the Granary Burying Ground, which also contains the graves of Samuel Adams, John Hancock, and other important people.

Attucks also became a symbol of the abolitionist (anti-slavery) movement in the 18th century. In the early 19th century, as the abolitionist movement gained strength in Boston, supporters praised Attucks as an African American who played a heroic role in the history of the United States. Because Attucks was of mixed African and Native American heritage, he also became an important figure in Native American history. 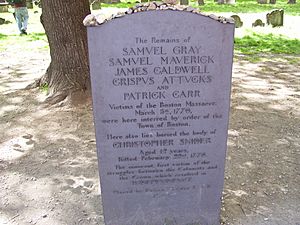 And to honor Crispus Attucks who was the leader and voice that day: The first to defy, and the first to die, with Maverick, Carr, and Gray. Call it riot or revolution, or mob or crowd as you may, such deaths have been seeds of nations, such lives shall be honored for aye...

"Black Crispus Attucks taught / Us how to die / Before white Patrick Henry’s bugle breath / Uttered the Vertical / Transmitting cry: / 'Yea, give me liberty or give me death.'”

All content from Kiddle encyclopedia articles (including the article images and facts) can be freely used under Attribution-ShareAlike license, unless stated otherwise. Cite this article:
Crispus Attucks Facts for Kids. Kiddle Encyclopedia.