Preamble to the United States Constitution facts for kids

We the People of the United States, in Order to form a more perfect Union, establish Justice, insure domestic Tranquility, provide for the common defence, promote the general Welfare, and secure the Blessings of Liberty to ourselves and our Posterity, do ordain and establish this Constitution for the United States of America.

"We the People" in an original version of the Constitution

"We the People" means all of the citizens of the United States.

At the time, Gouverneur Morris chose to write "We the People" instead of saying "We the United States of..." and then listing all thirteen states. First of all, Article Seven of the Constitution said that only nine states had to approve the Constitution for it to take effect. At the time, nobody knew which states would ratify the Constitution and which would not. Because of this, the Preamble could not list all thirteen states as if they had all already agreed. Also, if other states joined the United States later, it would be impossible to add their names to the list. For these reasons, the Preamble had to start with "We the People."

In Order to form a more perfect Union

"In order to form a more perfect union" is a concept most likely based on Commentaries on the Laws of England by Sir William Blackstone. It was widely read at the time and many of the framers were students of his work. Blackstone stated the constitution of England was perfect, but steadily improving. The phrase "a more perfect union" simply meant a better one than any before the Constitution.

Before the government based on the Constitution, the United States was based on the Articles of Confederation. However, had very little power as a federal government. They did not give the United States government enough power for the country to work and grow. Every state was for itself, instead of working cooperatively. Sometimes they acted like thirteen separate countries that would only come together if another country attacked them.

"Establish justice" meant to establish the rule of law. It meant that everyone was equal before the law with no distinction between the status or wealth of a person. With their new government, the Founding Fathers wanted to establish (create) justice and fairness. When the British Empire governed the American colonies, the colonists did not think the government was fair. For example, Parliament would decide that the colonists had to pay taxes on items like stamps and things that were made in other countries. The colonists did not have any say in this. 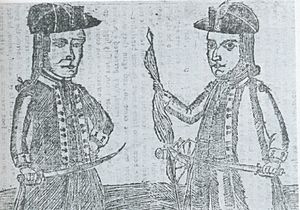 Shays' Rebellion was still fresh in the minds of the framers. It cause many to fear the spirit of the American Revolutionary War might be getting out of hand. There was a need to keep peace in the new country.

Just five years after the Articles of Confederation were ratified in 1781, many Americans were unhappy with the Articles. Many of the Founding Fathers thought that the Articles had made the United States government too weak. Shays' Rebellion made it very clear that the national government under the Articles of Confederation was not strong enough. Daniel Shays, a veteran of the American Revolutionary War, led the rebel farmers trying to overthrow the Massachusetts government. The farmers had formed an entire army, which neither the state or federal governments had enough soldiers or money to fight. In desperation Massachusetts offered to pay for a private army to fight the rebellion. Finally, in 1787, that private army defeated the rebels.pp.84-86

John Jay, one of the Founding Fathers, said that after the United States government could not pay for soldiers to defend against any armed rebellion: "the inefficiency of the Federal government [became] more and more [obvious]." Another Founding Father, Henry Knox, said that Shays' Rebellion convinced many people that the United States needed a stronger federal government.p.127 The Rebellion made it clear that the states were not protected, and if they were attacked, they would be on their own.

Provide for the common defence

"Provide for the common defense" meant the framers were well aware that independence from Great Britain did not mean they were secure. British Canada to the north was still full of angry loyalists. To the west were unknown numbers of hostile Native American tribes. Farther west was the vast Louisiana territory held by France. To the south the Spanish held Florida. Worse, these powers were fighting a series of wars in Europe that affected much of North America. The framers knew America needed to protect itself. Providing for the common defence meant the new government would make sure all of the states were protected and defended if attacked.

"Promote the general welfare" is the basic goal of all governments. It was the main reason for having a constitution.

In general, this part of the Preamble means that one of the new government's jobs would be to make things better for the whole country. Specifically, this part of the Preamble has to do with the government's powers to tax people and spend money. It means that the new government will only have the power to tax and spend on things that are good for the entire country. The government will not be allowed to spend money on things that will be good for only a part of the country, or only some people in the country.

For example, Article One, Section 8 of the Constitution gives Congress the power to tax people and spend money on creating Post Offices and building roads for mail carriers to use. Congress can do this because Post Offices will "promote the general Welfare"—everybody in the country will benefit from being able to send and get mail.

Secure the Blessings of Liberty to ourselves and our Posterity

"Secure the blessings of liberty to ourselves and our posterity" was important since many had come to America from places with little political or religious freedom. This phrase demonstrates the intent of the new government to protect the newly-won freedoms and protect against a tyrannical government.

However, the Articles of Confederation were all about the states' rights. At that time, many people were afraid of having a federal government that was too strong. These people were called anti-federalists. They included some of the Founding Fathers, like Patrick Henry and James Monroe. The anti-federalists worried that a strong federal government could become tyrannical and take away the rights of individual states, like they thought the British colonial government had done. They also worried that a government ruled by a President might turn into a monarchy, where the President would become a King and have total power. Because of these worries, the Articles of Confederation talked all about states' rights, and not about individual people's rights. The framers wanted to establish these rights for the people of the United States and their "posterity" meaning all the generations of Americans who would follow.

All content from Kiddle encyclopedia articles (including the article images and facts) can be freely used under Attribution-ShareAlike license, unless stated otherwise. Cite this article:
Preamble to the United States Constitution Facts for Kids. Kiddle Encyclopedia.