Westmoreland County is a county located in the Northern Neck of the Commonwealth of Virginia. As of the 2020 census, the population sits at 18,477. Its county seat is Montross.

As originally established by the Virginia colony's House of Burgesses, it was separated out of Northumberland County in 1653, and the territory of Westmoreland County encompassed much of what later became the various counties and cities of Northern Virginia, including the city of Alexandria, Arlington County, Fairfax County, and Prince William County. These were part of Westmoreland until 1664, when Stafford County was formed.

Westmoreland County was the birthplace of George Washington, the first President of the United States (at the former settlement of Bridges Creek, Virginia); of James Monroe, the fifth President; and of General Robert E. Lee, commander of the Confederate armies.

The county was the place of residence for Colonel Nicholas Spencer (1633-1689), who patented the land at Mount Vernon in 1674 with his friend Lt. Col. John Washington, ancestor of George Washington. Spencer, who served as President of the Council and acting Governor of the Colony of Virginia, was the cousin of, and agent for, the Barons Colepeper, proprietors of the Northern Neck. Spencer lived at his plantation, Nomini, which his descendants later sold to Robert Carter I. Robert Carter's grandson, Robert Carter III, voluntarily freed almost 500 slaves from Nomini Hall beginning in 1791 and settled many on lands he gave them. His manumission is the largest known release of slaves in North America prior to the American Civil War and the largest number ever manumitted by an individual in the U.S. 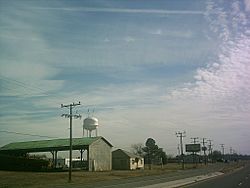 The county's economy is largely based on agriculture. Tourism is another significant economic driver, related to historical sites such as George Washington Birthplace National Monument and Robert E. Lee's birthplace, Stratford Hall Plantation, and the Westmoreland County Museum as well as gambling activities available in Colonial Beach. The county is also an extended exurb of Washington, D.C. 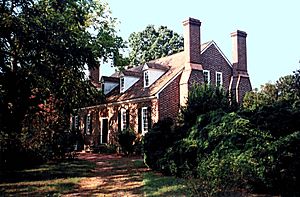 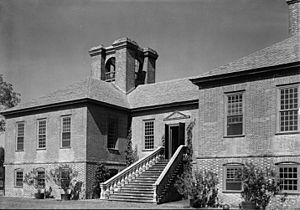 All content from Kiddle encyclopedia articles (including the article images and facts) can be freely used under Attribution-ShareAlike license, unless stated otherwise. Cite this article:
Westmoreland County, Virginia Facts for Kids. Kiddle Encyclopedia.