The Northern Neck is the northernmost of three peninsulas (traditionally called "necks" in Virginia) on the western shore of the Chesapeake Bay in the Commonwealth of Virginia (the other two are the Middle Peninsula and the Virginia Peninsula). This peninsula is bounded by the Potomac River on the north and the Rappahannock River on the south. It encompasses the following Virginia counties: Lancaster, Northumberland, Richmond, and Westmoreland.

In the winter of 1607–08, Captain John Smith traveled up the Rappahannock River as a prisoner of the Powhatans. He was the first European known to have visited the Northern Neck.

The original Northern Neck land grant in 1661 was a land grant first contrived by the exiled English King Charles II in 1649. It encompassed all the lands bounded by the Potomac and Rappahannock Rivers and, later, by a straight line (the "Fairfax Line") connecting their sources. This grant is significantly larger than the area currently known as the Northern Neck. The original grant was given to a proprietor. Semi-autonomy relative to the colonial government was provided by the proprietorial government until the American Revolution.

Most of the early development occurred on the eastern end of the peninsula where the Potomac and Rappahannock provided navigable waters. The autonomy and the excellent natural resources allowed rich planters to arise who established tobacco plantations in the Northern Neck. During the Colonial period, the Northern Neck was referred to as the "Athens of the New World" because of its collection of rich landowners dedicated to learning, gentlemanly society, and civic duty. This elite society was economically based on the exploitation of enslaved Africans and African Americans. An aristocratic society grew earlier than in areas to the south. The aristocratic society and autonomy of the Northern Neck created strong antipathies between the Northern Neck and other regions of Virginia. Later as the remainder of the mid-Atlantic states became developed, the importance of the Northern Neck would decline. It was relatively isolated from main trade routes and cities. This isolation may be a product of the earlier antipathies related to the differences in society in the Neck and in the regions farther south.

In February of 1766, 115 Northern Neck prominent citizens signed the Leedstown Resolutions in Leedstown which was an active port in (then) King George. This was the first recorded act of resistance against the Stamp Act. Leedstown is now in Westmoreland County. 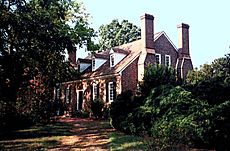 In 1687 a widespread slave conspiracy was crushed in the Northern Neck. During a mass funeral, slaves in the area planned to kill all whites and escape. The plot was discovered and its leaders executed. When authorities learned that they had plotted the uprising at gatherings for slave funerals, they prohibited such events.

The next year, the Northern Neck was the site of another attempted uprising, this one led by "Sam, a Negro Servt to Richard Metcalfe." A repeat offender, he had "several times endeavored to promote a Negro Insurreccon in this Colony." "To deter him & others from the like evil practice for time to come," the court ordered the sheriff of James City County to whip him severely, and return him to the Westmoreland County sheriff to be whipped again. Sam was sentenced to forever wear "a strong Iron collar affixed about his neck with four sprigs." Should he leave his master's plantation or remove the collar, he would be hanged.

Many important historical figures were born on the Northern Neck, including U.S. presidents George Washington (Westmoreland), James Madison (Port Conway in King George), and James Monroe (Westmoreland), as well as signers of the Declaration of Independence, Francis Lightfoot Lee and Richard Henry Lee, and the Confederate Civil War general Robert E. Lee. Richard Henry Lee was elected as the sixth president under the Articles of Confederation. Also residing in Westmoreland was Colonel Nicholas Spencer, member of the House of Burgesses, secretary and president of the Governor's Council, and on the departure of his cousin Thomas Colepeper, 2nd Baron Colepeper (aka Lord Culpeper), acting governor. Robert Carter I, agent for Thomas Fairfax, 6th Lord Fairfax of Cameron, was born at Corotoman Plantation and became President of the Governor's Council of the Virginia Colony, he was acting Governor of Virginia in 1726-1727 after the death in office of Governor Hugh Drysdale. His sons John Carter married Elizabeth Hill of Shirley Plantation and Landon Carter married Maria Byrd, daughter of Col. William Byrd II and resided at Sabine Hall, his grandson Robert Carter III inherited Nonomy Hall – purchased from the aforementioned Nicholas Spencer. Finally, the Tayloe Family established their family seat Mount Airy, on the southern shore of the neck, across from Tappahannock on a high perch overlooking the Rappahannock River. John Tayloe I, John Tayloe II who built Mount Airy and after Menokin for his son-in-law Francis Lightfoot Lee, John Tayloe III who later built the Octagon House and his sons John Tayloe IV, Benjamin Ogle Tayloe, William Henry Tayloe and George Plater Tayloe were all born here.

Mixed vegetable and grain farming were adopted by the later colonial period.

Later, the area developed a strong seafood industry. Reedville was once the wealthiest town in the United States, due to its menhaden fishing industry. Before the era of modern highways, many passenger and freight steamer routes linked the Chesapeake Bay region and connected with the railroads developed after 1830.

During the American Civil War, Northern Neck and particularly, King George County were on the frontier between the Union and Confederate armies. As such, King George was an operating base for spies on both sides. The Union forces controlled the Potomac River and the north shore of the Rappahannock River farther upstream for much of the war.

While trying to elude Union cavalry, on April 21, 1865, the co-conspirators John Wilkes Booth and David Herold crossed by rowboat into the Northern Neck in King George County from Maryland after assassinating President Abraham Lincoln. Booth and Herold landed at the mouth of Gambo Creek before meeting with Confederate agents who guided their passage to Port Conway. There, they crossed the Rappahannock River to Port Royal in Caroline County. Booth was killed and Herold captured a short distance away at Garrett's Farm.

Colonial Beach, a small incorporated town in Westmoreland County located on the Potomac River waterfront, developed as a popular tourist spot for the people of the Washington, D.C. area in the nineteenth and twentieth centuries. It offered a beach, swimming, and gambling. The gambling facilities were built on piers extending into the Potomac River to ensure they were inside Maryland, as the state border runs along the southern low tide line of the Potomac River. With the end of gambling, and improved access to competing Maryland and Delaware ocean beaches, Colonial Beach declined in popularity as a tourist destination. It and the rest of the Northern Neck still continue to attract dedicated outdoor enthusiasts for fishing and boating.

The region has 1100 miles of shoreline, containing beaches, marinas, old steamship wharfs, and small towns that date to colonial times. Today small farms, vineyards, and wineries are interspersed with retirement communities and rural businesses that share the land. Since the 1970s, wine-making has increased in importance in the Northern Neck. The federal government has recognized the Northern Neck George Washington Birthplace American Viticultural Area as a sanctioned wine appellation for wines grown in the five counties.

In 2004, the Menokin Bluegrass Festival was launched in Richmond County at the ruins of Francis Lightfoot Lee's ancestral home, Menokin. The festival attracts thousands of bluegrass fans every year to celebrate the Northern Neck's musical and historical heritage.

Tourism is a significant source of economic activity in the Northern Neck region. Visitors are attracted to the natural resources, and history and heritage of the peninsula. Natural attractions include national parks, state parks, and agri-tourism, while a number of historic sites related to the nation's founders are open to the public. Colonial Beach, Westmoreland State Park, Rappahannock River National Wildlife Refuge, and many other locations provide water access for fishing, boating, and yachting. The region has twenty-seven marinas.

There are nine wineries in the region that may be found on the Chesapeake Bay Wine Trail.

Other popular Northern Neck attractions include Stratford Hall, the birthplace of Robert E. Lee and an example of a Virginia plantation, George Washington Birthplace National Monument, the Westmoreland Berry Farm, and the Westmoreland State Park with Horsehead Cliffs.

All content from Kiddle encyclopedia articles (including the article images and facts) can be freely used under Attribution-ShareAlike license, unless stated otherwise. Cite this article:
Northern Neck Facts for Kids. Kiddle Encyclopedia.