Lancaster County is a county located on the Northern Neck in the Commonwealth of Virginia. As of the 2020 census, the population sits at 10,919. Its county seat is Lancaster. 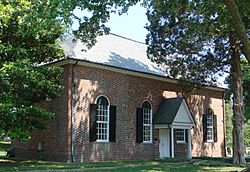 Lancaster County was established in 1651 from Northumberland and York counties. It was home to Robert King Carter in the 18th century, and remaining buildings from that time include Christ Church and St. Mary's, Whitechapel. Other historic attractions open to the public include the Lancaster Courthouse Historic District including the Mary Ball Washington Museum and Library, Belle Isle State Park, and the Village of Morattico Historic District. 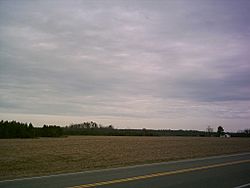 Outskirts of Lively, in Lancaster County

Lancaster County is home to the historic church of St. Mary's, Whitechapel, founded in 1669. Mary Ball Washington, mother of George Washington, was born in the parish of St. Mary's. Rappahannock General Hospital is in Kilmarnock, it is the only hospital on the Northern Neck. Other attractions are:

All content from Kiddle encyclopedia articles (including the article images and facts) can be freely used under Attribution-ShareAlike license, unless stated otherwise. Cite this article:
Lancaster County, Virginia Facts for Kids. Kiddle Encyclopedia.