Colonial Beach, Virginia (CBVA) is a river and beach town located in the northwestern part of Westmoreland County on Virginia's Northern Neck peninsula. It is bounded by the Potomac River, Monroe Bay and Monroe Creek. It is located 65 mi (105 km) from Washington, D.C.; 70 mi (110 km) from the state capital of Richmond; and 35 nautical miles from the Chesapeake Bay.

Colonial Beach was a popular resort town in the early to mid-20th century, before the Chesapeake Bay Bridge made ocean beaches on the Eastern Shore of Maryland more accessible to visitors from Washington, D.C. The family of Alexander Graham Bell maintained a summer home in Colonial Beach, the Bell House, which still stands today. Sloan Wilson, author of The Man in the Gray Flannel Suit, retired and died in Colonial Beach. George Washington, the first President of the United States, was born near here at what is now the George Washington Birthplace National Monument. As of 2011[update], the James Monroe Family Home Site, birthplace of President James Monroe, now has a small monument to him.

The town was first settled in 1650 by the great-great grandfather of President James Monroe, as Monrovia.

Colonial Beach emerged as a bathing and fishing resort in the late 19th century known as the "Playground on the Potomac." Prior to automobile travel, most visitors arrived by boat from Washington, D.C.

The town was incorporated on 25 February 1892 and there was extensive construction of houses, summer cottages, and hotels. Arguably the most famous of these structures is the Alexander Graham Bell house which still stands on Irving Avenue as the Bell House Bed and Breakfast.

The area was at the center of the Potomac River Oyster Wars between Virginia watermen and the Maryland State Oyster Police that lasted from the late 19th century to the 1960s.

The town began to gradually decline as the automobile made travel to more distant ocean beaches more feasible. However, because gambling was legal in Maryland and the Maryland state line ends at the low-water mark of Virginia's Potomac River shore, from 1949 to 1958, Colonial Beach offered slot machines in pier casinos extending into Maryland waters. This temporarily revitalized the town, although it was sometimes called "the poor man's Las Vegas." However, the piers burned in the 1960s in a devastating fire and the town continued to decline.

The town is ranked fifth-safest place to live in Virginia by Safewise.

Colonial Beach is located in the northwestern part of Westmoreland County in Virginia's Northern Neck, 65 mi (105 km) from Washington, D.C., and 70 mi (110 km) from the state capital Richmond.

The Potomac River forms the northeast boundary of Colonial Beach. The southern part of the town forms a peninsula which ends just above Monroe Bay and divides Monroe Creek from the Potomac River. A short distance north of Colonial Beach is the community of Potomac Beach and the mouth of Rosier Creek. Inland from Colonial Beach lie the settlements of Monroe Hall, near the birthplace of President James Monroe, and Maple Grove. 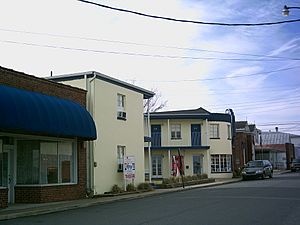 The climate in this area is characterized by hot, humid summers and generally mild to cool winters. According to the Köppen Climate Classification system, Colonial Beach has a humid subtropical climate, abbreviated "Cfa" on climate maps. 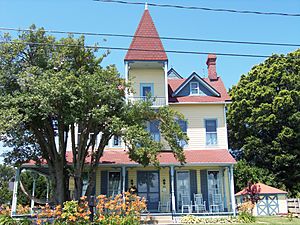 Colonial Beach is served by Virginia State Route 205, a spur of which bisects the town as State Route 205Y (Colonial Avenue). The town is accessible by boat and is the last deepwater port for pleasure boats going north on the Potomac River.

All content from Kiddle encyclopedia articles (including the article images and facts) can be freely used under Attribution-ShareAlike license, unless stated otherwise. Cite this article:
Colonial Beach, Virginia Facts for Kids. Kiddle Encyclopedia.