Montross is a town in Westmoreland County, Virginia, United States. The population was 315 at the 2000 census. It is the county seat of Westmoreland County. Located in the historic Northern Neck of Virginia, Montross is near the George Washington Birthplace National Monument and Stratford Hall Plantation (birthplace of Robert E. Lee, Richard Henry Lee, and Francis Lightfoot Lee).

The Old Westmoreland Court House in Montross was the site of notable events in 1774–1775 connected with the Revolutionary War. According to an historic marker at the courthouse, a resolution was introduced by Richard Henry Lee and adopted at a meeting there on June 22, 1774, providing aid to Boston, Massachusetts, following a blockade of that beleaguered port city by Great Britain. The seizure in 1775 of the Virginia Colony's gunpowder supply in Williamsburg on orders of the Royal Governor, in what became known as the Gunpowder Incident, prompted the Westmoreland Committee of Safety to convene at the Court House on May 23, 1775. The committee passed a resolution denouncing the governor, Lord Dunmore, for his actions.

According to the United States Census Bureau, the town has a total area of 1.0 square miles (2.6 km²), all of it land. 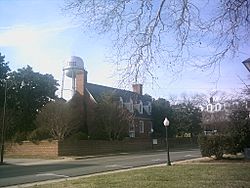 There were 151 households out of which 22.5% had children under the age of 18 living with them, 47.0% were married couples living together, 11.3% had a female householder with no husband present, and 37.1% were non-families. 33.8% of all households were made up of individuals and 19.9% had someone living alone who was 65 years of age or older. The average household size was 2.05 and the average family size was 2.59. 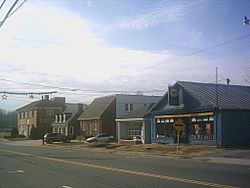 Once a year, Montross has a festival in celebration of the town. It includes parades and game stands. The fun event is usually held in October and is widely attended by town residents.

In 2000, Montross was on television's Late Show with David Letterman. In a segment called, "Biff Henderson's America", comedian Biff Henderson visited the small town's museum, Bargain Shop, Sheriff's Department, the Coca-Cola Bottling Plant, and the Potomac River. He also interviewed people during his visit, jokingly asking them if they would like Biff to be mayor.

In 2012, Tevin Jones was killed in a motorcycle accident when he struck a utility vehicle. He is the younger brother of Baltimore Ravens wide receiver, Torrey Smith. Tevin was just 18 years of age.

All content from Kiddle encyclopedia articles (including the article images and facts) can be freely used under Attribution-ShareAlike license, unless stated otherwise. Cite this article:
Montross, Virginia Facts for Kids. Kiddle Encyclopedia.