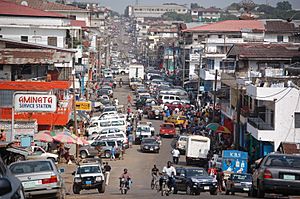 Monrovia is the capital of Liberia. It is Liberia's most populous city with a population of 1,010,970. The city is named after 5th U.S. President James Monroe.

Monrovia was founded in 1822 by the American Colonization Society. They wanted free slaves. Liberia has the word liberty in it and it was meant for slaves for slaves to free from america.

All content from Kiddle encyclopedia articles (including the article images and facts) can be freely used under Attribution-ShareAlike license, unless stated otherwise. Cite this article:
Monrovia Facts for Kids. Kiddle Encyclopedia.