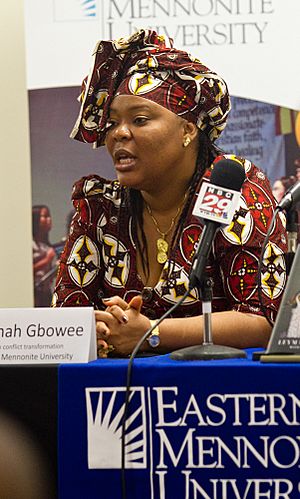 Leymah Roberta Gbowee (born 1 February 1972) is a Liberian peace activist. In 2011 she won the Nobel Peace Prize with Ellen Johnson-Sirleaf and Tawakel Karman. This made Gbowee the second African woman to win the prize. Her book was published in 2011.

Gbowee was born in central Liberia. She was living with her parents and sisters in Monrovia when the First Liberian Civil War started in 1989. Gbowee was 17 and planning to study medicine. The war made things unsafe for Gbowee and her family. Gbowee moved to Ghana and lived as a refugee there. She later fled back to Liberia.

All content from Kiddle encyclopedia articles (including the article images and facts) can be freely used under Attribution-ShareAlike license, unless stated otherwise. Cite this article:
Leymah Gbowee Facts for Kids. Kiddle Encyclopedia.