Over the past twelve years the city has been undergoing extensive urbanization projects, improving streets and avenues, as well as infrastructure for the traffic which the city receives every day.

It is the eighth and fourth municipality in the consumer market in the state outside the Greater São Paulo metropolitan area, with a potential annual per capita consumption estimated at $2,400 for the urban population and $917 for rural areas (7200 people) and twenty-ninth-largest city in Brazil with potential for consumption. Still, it is the fourth-largest city of the state to receive new investments and one of the largest in the country, figuring in the list of 30 cities that create more jobs in Brazil. 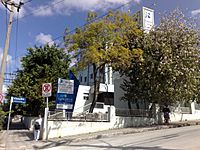 Dom Francisco de Sousa, general governor of Brazil (1591 to 1602), believing in the existence of gold in the region, settled the Pelourinho—a Portuguese translation of the English "pillory", symbol of the Royal power, as the village Nova Vila de Nossa Senhora da Ponte de Mont Serrat. When gold wasn't found there, the governor returned to the Royal Court. Twelve years later, Dom Francisco de Sousa changed the name of the village to Itavuvu.

Baltasar Fernandes, a member of an expeditionary group called Bandeirantes, laid the foundation of Sorocaba in the 1654. The chapel of Nossa Senhora da Ponte (which is now the Cathedral located in Fernando Prestes square, downtown) was built by him, along with the São Bento de Parnaíba monastery (now São Bento monastery) years later. It was also Fernandes who brought the first Benedictine monks to teach, assist the poor and the ill, and convert the Native Americans of the region. The monastery was donated to the Benedictines in the year 1660, after which Friar Anselmo da Anunciação and Friar Mauro were chosen to take office. The first streets and houses started to spread around the neighborhood.

With the arrival of colonel Cristóvão Pereira de Abreu and his troops in 1773, begins the main chapter of the history of Sorocaba: the Tropeirismo.

The transportation of goods on the back of mules, that traversed the North-South route of the country came across Sorocaba, which was strategically placed in the main route between Rio Grande do Sul, Minas Gerais and Rio de Janeiro. Soon Sorocaba had its own Feira de Muares (mule/horse fair), where troops from all states came to feed and rest their cavalry on the way to the mineral and forest expeditions, and buy and sell goods, horses and enslaved Africans. Given the growing number of people working in the city, the commerce and the first industries began to appear. Goods bought in Sorocaba were known from across the Country, spread by the merchant troops. The main events of Tropeirismo comprehended a hundred years of the Sorocaba history, from 1770 to 1870.

During the American Civil War, English textile industries ran out of cotton, which was imported from the Southern United States. Soon, manufactures from England started to search around the world for alternative places to cultivate cotton - one of them was the then-Province of São Paulo, which included Sorocaba. In 1862, Lieutenant-Colonel Francisco Gonçalves de Oliveira Machado started the first cotton plantation in Sorocaba. The local environment and weather were ideal, and the plantation flourished. The first harvest exceeded all expectations, starting another cycle of industrial and economic development. Several textile industries from England built branches in the city, changing the landscape with chimneys, saw-styled roofs, large, orange brick-built buildings and smoke. During this time, Sorocaba received the title of Manchester Paulista--"São Paulo native" in Portuguese, given the resemblance with its laboring twin city.

With the opening of the Sorocabana railway on June 20, 1872 and its transport of cotton products, animals and passengers to São Paulo, Sorocaba had a major leap in development. Six locomotives and 62 bandwagons were brought from England, with seven stations initially planned.

Telegraphic services started on April 3, 1873. Years later, the railway expanded to the borders of the state, with Sorocaba station as the hub.

The city is located in the southeastern region of the state of São Paulo, 92 km away from the state capital. The main highways are Castelo Branco (SP-280) and Raposo Tavares (SP-270). It straddles the Sorocaba River, a tributary of the left bank of the Tiete river. The municipality of Sorocaba is located on the Tropic of Capricorn, at latitude 23° 26 '16 " for the season of 2011, passes along the neighborhoods of Aparecidinha and Parque São Bento districts. At the junction of Highway José Ermírio José de Morais (SP-75) with the connection to the Raposo Tavares highway is a milestone signaling the Tropic. Among Brazil's largest cities (by population), Sorocaba is in 30th place. Sorocaba is among the major cities in São Paulo (population), is ranked ninth.

All content from Kiddle encyclopedia articles (including the article images and facts) can be freely used under Attribution-ShareAlike license, unless stated otherwise. Cite this article:
Sorocaba Facts for Kids. Kiddle Encyclopedia.