The attraction opened in 1996. In 2005, the site was one of the finalists to host the NASCAR Hall of Fame. After losing the hall of fame bid, due to high operating costs and low attendance, parent company International Speedway Corporation announced on November 6, 2010 that the attraction would no longer be open to the public but would be available only for private functions.

After being closed to the public for four years, it was announced in 2014 that the Motorsports Hall of Fame of America would relocate to the site. The new expanded and refurbished museum opened in February 2017.

Through 1995, Daytona International Speedway featured a modest two-story visitors’ center outside of the oval's fourth turn. The first floor of the visitors' center housed the ticket office and a small sampling of racing memorabilia; the second floor was home to a wall of photographs of previous Daytona 500 winners. The Speedway also offered track tours on open-air trams.

In mid- to late-1995, the visitors center was closed and a new destination-style, interactive museum was designed to take its place. The attraction opened in July 1996 during the 1996 Pepsi 400 using the name Daytona USA. (It should not be confused with the arcade game of the same name, though the game is featured in the attraction's arcade.) The attraction was awarded the Themed Entertainment Association's Thea Award of Outstanding Achievement in September 1997.

The 60,000 sq ft (5,600 m2) attraction boasted several exhibit areas, simulators and interactive displays. Some of these remain active for private functions, however the IMAX presentation will no longer be shown.

The Champion's Walk of Fame, a Hollywood-esque concrete walk paying homage to winners of the Daytona 500 since the attraction opened in 1996, is just outside the building, as are statues of NASCAR great Dale Earnhardt and NASCAR founder Bill France, Jr. and his wife Anne. Also on display inside the attraction are the NASCAR championship trophy and the Harley J. Earl Trophy, which is awarded to the winner of the Daytona 500.

The Daytona 500 Experience also once housed an arcade that featured many racing-themed arcade games, one of which was Sega's wildly popular Daytona USA, with which the attraction formerly shared its name with.

The two different Speedway Tours that the attraction featured are still offered by the speedway with some modifications: the 30-minute general admission tour and a new, 60-minute All-Access tour that is available to the public for a higher fee and covers more ground. 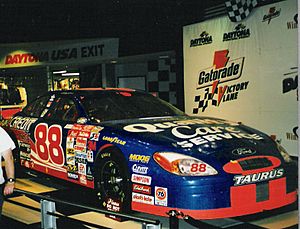 Since 1997, the winning car from the Daytona 500 is impounded and displayed for the next twelve months at the Daytona 500 Experience. It is a popular but controversial display, and a highlight exhibit of the museum.

All winners are contractually required to surrender their winning car and all its parts, in uncleaned, complete, and unaltered condition, as explicitly specified on the race entry form. This practice is often criticized by participants because it prevents the team from driving the car (clearly a successful chassis) in the other races during the season. They argued it potentially put them at a competitive disadvantage during the rest of the NASCAR season, most notably at the other restrictor plate races. Only twice since this display arrangement was adopted in 1997 was the winner of the Daytona 500 able to take a different car, as required, and gone on to win the next restrictor plate race (Talladega): Jeff Gordon in 2005 and Jimmie Johnson in 2006. By the time the car is returned, approximately 364 days after the victory, it is usually considered obsolete and a write-off.

The morning after the race the winning car is inducted into the museum during the Champion's Breakfast ceremony. In some years, the driver's helmet, driving suit, and/or other race-used paraphernalia are also included for display. The driver also has the honor of unveiling the logo for next year's Daytona 500.

All content from Kiddle encyclopedia articles (including the article images and facts) can be freely used under Attribution-ShareAlike license, unless stated otherwise. Cite this article:
Daytona 500 Experience Facts for Kids. Kiddle Encyclopedia.