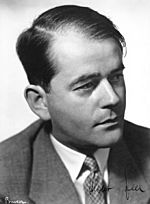 Berthold Konrad Hermann Albert Speer (19 March 1905 in Mannheim, Germany – 1 September 1981 in London, England) was a leading German architect in the Third Reich. Speer was born in Mannheim, Baden. Adolf Hitler's chief architect before he became the minister for munitions and armaments in 1942. He was also a member of Hitler's Cabinet.

Speer died of a stroke. His son, Albert Speer Jr. was also an architect.

All content from Kiddle encyclopedia articles (including the article images and facts) can be freely used under Attribution-ShareAlike license, unless stated otherwise. Cite this article:
Albert Speer Facts for Kids. Kiddle Encyclopedia.