The Victory Column is a monument in Berlin, Germany. Designed by Heinrich Strack after 1864 to commemorate the Prussian victory in the Danish-Prussian War, by the time it was inaugurated on 2 September 1873, Prussia had also defeated Austria and its German allies in the Austro-Prussian War (1866) and France in the Franco-Prussian War (1870–71), giving the statue a new purpose. Different from the original plans, these later victories in the so-called unification wars inspired the addition of the bronze sculpture of Victoria, 8.3 metres (27 ft) high and weighing 35 tonnes, designed by Friedrich Drake. Berliners have given the statue the nickname Goldelse, meaning something like "Golden Lizzy".

The Victory Column is a major tourist attraction in the city of Berlin. Its viewing platform, for which a ticket is required, offers a view over Berlin.

Built on a base of polished red granite, the column sits on a hall of pillars with a glass mosaic designed by Anton von Werner.

The column itself, designed by Heinrich Strack and inspired by the "lighthouse of Brescia" which stands in the Cimitero Vantiniano, the monumental cemetery of Brescia, consists of four solid blocks of sandstone, three of which are decorated by cannon barrels captured from the enemies of the aforementioned three wars. A fourth ring is decorated with golden garlands and was added in 1938–39 when the whole monument was relocated to its present position. The entire column, including the sculpture, is 67 metres (220 ft) tall.

Werner designed the original hall of pillars with a glass mosaic.

The foundation is decorated with four bronze reliefs showing the three wars and the victorious marching of the troops into Berlin. They were created by:

The relief decoration was removed in 1945. It was restored for the 750th anniversary of Berlin in 1987 by the French president at that time, François Mitterrand. 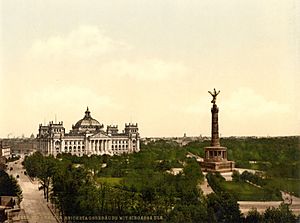 Victory Column in its original size and location, on the Königsplatz across from the Reichstag, in 1900 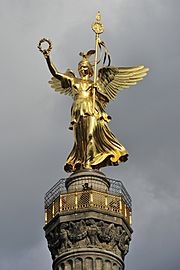 The statue of Victoria
(cast by the Gladenbeck foundry, Berlin) 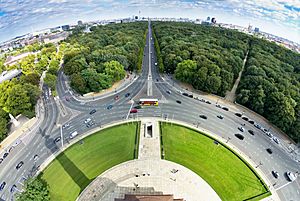 View from the platform of the Victory Column towards Brandenburg Gate

The Victory Column originally stood in Königsplatz (now Platz der Republik), at the end of the Siegesallee (Victory Avenue). In 1939, as part of the preparation of the monumental plans to redesign Berlin into Welthauptstadt Germania, the Nazis relocated the column to its present site at the Großer Stern (Great Star), a large intersection on the city axis that leads from the former Berliner Stadtschloss (Berlin City Palace) through the Brandenburg Gate to the western parts of the city.

At the same time, the column was augmented by another 7.5 metres, giving it its present height of 66.89 metres. The monument survived World War II without much damage. The relocation of the monument probably saved it from destruction, as its old site – in front of the Reichstag, at exactly 1,500 metres (one Roman mile) from the proposed new north-south triumphal way of the Nazis in line with the Imperial Victory Avenue in the Tiergarten – was destroyed by American air raids in 1945.

Surrounded by a street circle, the column is also accessible to pedestrians through four tunnels, built in 1941 to plans by Albert Speer who likewise increased the width of the road between it and the Brandenburg Gate and designed the new Germania which was scheduled for construction after the victory obtained in the war. Via a steep spiral staircase of 281 steps, the physically fit may, for a fee, climb almost to the top of the column, to just under the statue and take in the views over the Tiergarten including the Soviet War Memorial, 1946, in line with the Nazi proposed north-south triumphal way by Speer and Adolf Hitler.

"El Ángel", built in 1910 in Mexico City, bears a more than passing resemblance to the Berlin victory column, while both echo the earlier examples of the victory column crowned by an angel, notably the Alexander Column in Saint Petersburg.

During the Battle of Berlin of 1945, Soviet Troops nicknamed the column "the Tall Woman". Polish Army troops, fighting alongside their Soviet allies, hoisted the Polish flag on the column on 2 May 1945 at the end of the Battle in Berlin. 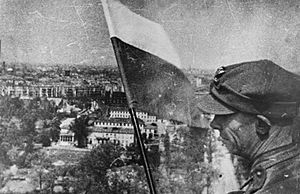 Polish flag raised on the top of Berlin Victory Column on May 2, 1945.

It served as the location for Barack Obama's speech in Berlin as a US presidential candidate during his visit to Germany on 24 July 2008. The choice of site was controversial as it symbolises German military victories of the past and is seen by some as a monument to German militarism.

The golden statue atop the column, cast in 1873 by the Aktien-Gesellschaft Gladenbeck foundry in Berlin, was featured in the music video to U2's 1993 "Stay (Faraway, So Close!)".

The column is shown in Wim Wenders' Wings of Desire (1987) as a gathering place for angels.

All content from Kiddle encyclopedia articles (including the article images and facts) can be freely used under Attribution-ShareAlike license, unless stated otherwise. Cite this article:
Berlin Victory Column Facts for Kids. Kiddle Encyclopedia.