Arno Breker (19 July 1900 – 13 February 1991) was a German architect and sculptor who is best known for his public works in Nazi Germany, where they were endorsed by the authorities as the antithesis of degenerate art. One of his better known statues is Die Partei, representing the spirit of the Nazi Party that flanked one side of the carriage entrance to Albert Speer's new Reich Chancellery.

Breker was born in Elberfeld, in the west of Germany, the son of stonemason Arnold Breker. He began to study architecture, along with stone-carving and anatomy. At age 20 he entered the Düsseldorf Academy of Arts where he concentrated on sculpture, studying under Hubert Netzer and Wilhelm Kreis. He first visited Paris in 1924, shortly before finishing his studies. There he met with Jean Cocteau, Jean Renoir, Pablo Picasso, Daniel-Henry Kahnweiler, and Alfred Flechtheim. In 1927 he moved to Paris, which he thereafter considered to be his home, in the same year he had an exhibition with Alf Bayrle. Breker was quickly accepted by the art dealer Alfred Flechtheim. He also established close relationships with important figures in the art world, including Charles Despiau, Isamu Noguchi, Maurice de Vlaminck and André Dunoyer de Segonzac, all of whom he later portrayed. He travelled to North Africa, producing lithographs which he published under the title "Tunisian Journey". He also visited Aristide Maillol, who was later to describe Breker as "Germany's Michelangelo". 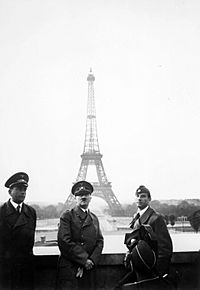 In 1932, he was awarded a prize by the Prussian Ministry of Culture, which allowed him to stay in Rome for a year. In 1934 he returned to Germany on the advice of Max Liebermann. At this time Alfred Rosenberg, editor of the Nazi newspaper Völkischer Beobachter, actually denounced some of Breker's work as degenerate art. However, Breker was supported by many Nazi leaders, especially Adolf Hitler. Even Rosenberg later hailed his sculptures as expressions of the "mighty momentum and will power” (“Wucht und Willenhaftigkeit”) of Nazi Germany. He took commissions from the Nazis from 1933 through 1942, for example participating in a show of his work in occupied Paris in 1942, where he met Jean Cocteau, who appreciated his work. He maintained personal relationships with Albert Speer and with Hitler. In 1936 he won the commission for two sculptures representing athletic prowess, intended for the 1936 Olympic games, one representing a Decathlete (“Zehnkämpfer”) and the other The Victress (“Die Siegerin”). In 1937 he married Demetra Messala (Δήμητρα Μεσσάλα), a Greek model. The same year, Breker joined the Nazi Party and was made "official state sculptor" by Hitler, given a large property and provided a studio with forty-three assistants. Hitler also exempted him from military service. His twin sculptures The Party and The Army held a prominent position at the entrance to Albert Speer's new Reich Chancellery, as well as the “Striding Horses” (1939), which until 1945 flanked the entrance stairs on the garden front of Adolf Hitler's Reich Chancellery in Berlin.

The neoclassical nature of his work, with titles like Comradeship, Torchbearer, and Sacrifice, typified Nazi ideals, and suited the characteristics of Nazi architecture. On closer inspection, though, the proportions of his figures, the highly colouristic treatment of his surfaces (the strong contrasts between dark and light accents), and the melodramatic tension of their musculatures perhaps invites comparison with the Italian Mannerist sculptors of the 16th century. This Mannerist tendency to Breker's neoclassicism may suggest closer affinities to concurrent expressionist tendencies in German Modernism than is acknowledged.

Until the fall of the Third Reich, Breker was a professor of visual arts in Berlin. While nearly all of his sculptures survived World War II, more than 90% of his public work was destroyed by the Allies after the war. In 1946, Breker was offered a commission by Joseph Stalin but he refused and stated "One dictatorship is sufficient for me". In 1948 Breker was designated as a "fellow traveller" of the Nazis and fired, upon which he returned to Düsseldorf. The latter city remained his base, with periods of residence in Paris. During this time he worked as an architect. However, he continued to receive commissions for sculptures, producing a number of works in his familiar classical style, working for businesses and individual patrons. He also produced many portrait sculptures. In 1970 he was commissioned by the king of Morocco to produce work for the United Nations Building in Casablanca, but the work was destroyed. Many other works followed, including portraits of Anwar Sadat and Konrad Adenauer. Breker's rehabilitation continued, culminating in plans for the creation of a Breker museum, funded by the Bodenstein family, who set aside Schloss Nörvenich (between Aachen and Cologne) for the purpose. The Arno Breker Museum was inaugurated in 1985.

Breker's rehabilitation led to backlashes from anti-Nazi activists, including controversy in Paris when some of his works were exhibited at the Centre Georges Pompidou in 1981. In the same year anti-Breker demonstrations accompanied an exhibition in Berlin. Breker's admirers insisted that he had never been a supporter of Nazi ideology (despite being a member of the Nazi Party), but had simply accepted their patronage.

Breker's last major work was a monumental sculpture of Alexander the Great intended to be located in Greece.

Arno Breker was married twice. His first wife, Demetra Messala, was a Greek model. She died in 1956 in a car accident. He remarried in 1958 to Charlotte Kluge. They had two children, Gerhart (1959) and Carola (1962). Breker remained married to Kluge until his death in 1991. 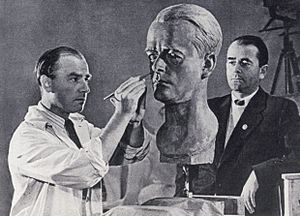 Arno Breker carves a portrait of Albert Speer in 1940 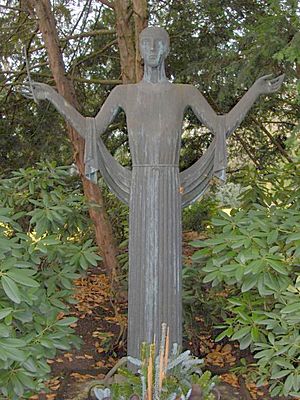 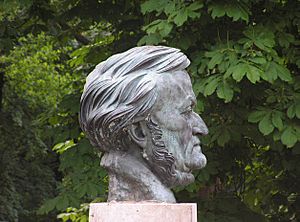 Bust of Richard Wagner in Bayreuth. 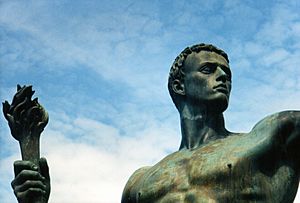 Die Partei, Breker's statue "Die Partei", representing the spirit of the Nazi Party that flanked one side of the carriage entrance to Albert Speer's new Reich Chancellery.

All content from Kiddle encyclopedia articles (including the article images and facts) can be freely used under Attribution-ShareAlike license, unless stated otherwise. Cite this article:
Arno Breker Facts for Kids. Kiddle Encyclopedia.