Koblenz, spelled Coblenz before 1926, is a German city situated on both banks of the Rhine where it is joined by the Moselle.

Koblenz was established as a Roman military post by Drusus around 8 B.C. Its name originates from the Latin meaning at the confluence" of the two rivers.

The actual confluence is today known as the "German Corner", a symbol of the unification of Germany that features an equestrian statue of Emperor William I. The city celebrated its 2000th anniversary in 1992.

After Mainz and Ludwigshafen am Rhein, it is the third-largest city in Rhineland-Palatinate, with a population of around 112,000 (2015). Koblenz lies in the Rhineland.

Fortress Ehrenbreitstein as seen from Koblenz

Its defensive works are extensive, and consist of strong forts crowning the hills encircling the city to the west, and the citadel of Ehrenbreitstein on the opposite bank of the Rhine. The old city was triangular in shape, two sides being bounded by the Rhine and Mosel and the third by a line of fortifications. The latter were torn down in 1890, and the city was permitted to expand in this direction.

The Koblenz Hauptbahnhof (central station) was built on a spacious site outside the former walls at the junction of the Cologne-Mainz railway and the strategic Metz-Berlin line. In April 2011 Koblenz-Stadtmitte station was opened in the inner city to coincide with the opening of the Federal Garden Show 2011. 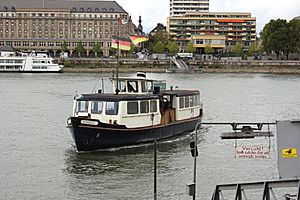 Ferryboat „Schängel“ on the way from Ehrenbreitstein to Koblenz. The ship was built in 1953

The Rhine is crossed by the Pfaffendorf Bridge, originally the location of a rail bridge, but now a road bridge and, a mile south of city, by the Horchheim Railway Bridge, consisting of two wide and lofty spans carrying the Lahn Valley Railway, part of the Berlin railway referred to above. The Moselle is spanned by a Gothic freestone bridge of 14 arches, erected in 1344, two modern road bridges and also by two railway bridges. 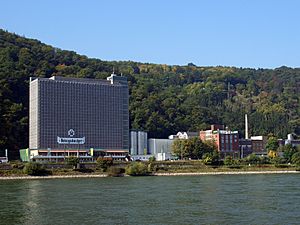 Koblenz is a principal seat of the Mosel and Rhenish wine trade, and also does a large business in the export of mineral waters. Its manufactures include automotive parts, gas springs, hydraulic vibration dampers, aluminium coils, pianos, paper, cardboard, machinery, boats, and barges. Since the 17th century, it has been home to the Königsbacher. It is an important transit centre for the Rhine railways and for the Rhine navigation.

The headquarters of the German Army Forces Command is located in the city.

Since September 19, 2012 an Amazon logistics centre is in service. It is located some 15 kilometres (9 miles) outside the city at the Autobahnkreuz Koblenz.

All content from Kiddle encyclopedia articles (including the article images and facts) can be freely used under Attribution-ShareAlike license, unless stated otherwise. Cite this article:
Koblenz Facts for Kids. Kiddle Encyclopedia.