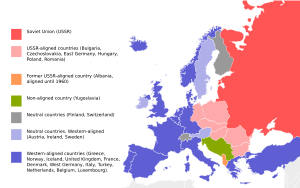 The Western Bloc during the Cold War means the powers allied with the United States and NATO against the Soviet Union and the Warsaw Pact.

Soviet Union and the Warsaw Pact were called the Eastern Bloc. This term was rather common, while the governments and press of the Western Bloc used to speak of themselves as the Free world.

All content from Kiddle encyclopedia articles (including the article images and facts) can be freely used under Attribution-ShareAlike license, unless stated otherwise. Cite this article:
Western Bloc Facts for Kids. Kiddle Encyclopedia.