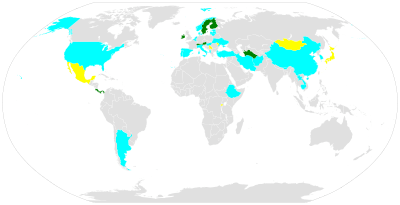 A neutral country is one that chooses not to take part in a War between other countries. International law allows a country to remain neutral during a period of war between two or more states. When a country declares it is neutral, it cannot allow any part of its territory from becoming a base for one side. It may not construct warships, recruit soldiers or organize military expeditions on behalf of one belligerent. It is also called "armed neutrality" when declaring itself neutral during a war. This is not the same as "neutralization", or permanent neutrality. A neutral country is also different from the neutrality claimed by non-governmental organizations (NGOs) or United Nations peacekeeping groups.

An example of permanent neutrality would be the Vatican City. It declared itself permanently neutral in the 1929 Lateran Treaty.

Having a long history of remaining neutral, Switzerland became a favorite place for the headquarters of many organizations. The International Red Cross established itself at Geneva during the mid-19th century. Switzerland was recognized as remaining neutral in a 1920 declaration by the League of Nations, also headquartered in Geneva. When the League was disbanded after World War II it was replaced by the United Nations. While Switzerland did not join the UN, in addition to recognizing its neutrality it was also given permanent observer status.

Note: Whether a state that is a member of the European Union may be considered neutral is a point of debate. This is discussed in the section below.

Claim to be neutral

All content from Kiddle encyclopedia articles (including the article images and facts) can be freely used under Attribution-ShareAlike license, unless stated otherwise. Cite this article:
Neutrality (international relations) Facts for Kids. Kiddle Encyclopedia.