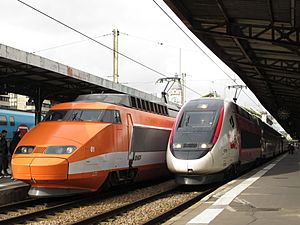 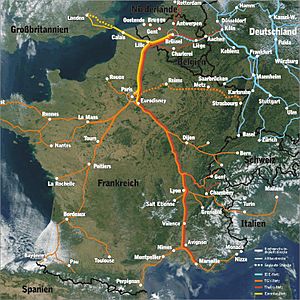 Section of the European high speed network, the yellow, orange and red parts are TGV

The TGV (Train à Grande Vitesse, French for "high-speed train"), is a category of high speed trains. They are used in France. They are also used for some travel between France and England, Belgium, the Netherlands, Germany, Switzerland, Italy and Spain. The trains normally travel at speeds between 270 km/h and 320 km/h. They are the fastest normal trains in the world, their average travel speed is at 279,4 km/h.

Inside France, there are the following high speed lines

Lines to Spain and Italy are being planned. A High speed line to Germany is being built.

The building of the network has made travel times much shorter. Paris to Marseille (750km) can now be done in 3 hours. Two thirds of the traffic volume is done by the TGV, only one third is done by airplanes.

TGVs for other uses

Since the beginning of the high-speed rail network, the French Poste uses TGVs to transport mail, mostly between Paris, Mâcon and Cavaillon.But the train was retired in 2015. These use the high-speed lines (LGV Sud-Est) during the night.

In the north of France, the high-speed lines are also used to run regional trains over longer distances. There are currently train from Lille to Dunkerque. This takes half an hour. Other lines run to Calais, in forty minutes, or to Boulogne-sur-Mer in 55. In 2007, a line to Arras was opened, which is also very successful. Unfortunately, there are some problems with this approach. First, only high-speed lines can be used that are not saturated, because these trains run slower than regular TGVs. Secondly, using a TGV line costs more to the client, they have to pay extra. This makes these services more expensive.

All content from Kiddle encyclopedia articles (including the article images and facts) can be freely used under Attribution-ShareAlike license, unless stated otherwise. Cite this article:
TGV Facts for Kids. Kiddle Encyclopedia.