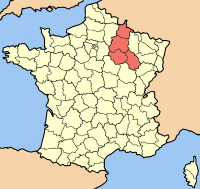 Champagne-Ardenne is in red 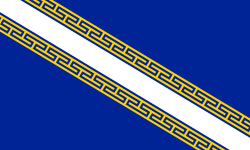 The departments in Champagne-Ardenne were Ardennes, Aube, Marne, and Haute-Marne.

The region is heavily centered on farming. It was the first region of France in the production of barley and alfalfa. Many cereals are also grown here. It is also very important for vegetables and wine. It is nearest to the east border. Sparkling wine is officially allowed to be called champagne if it is from here.

All content from Kiddle encyclopedia articles (including the article images and facts) can be freely used under Attribution-ShareAlike license, unless stated otherwise. Cite this article:
Champagne-Ardenne Facts for Kids. Kiddle Encyclopedia.