Ardennes is a department in the Grand Est region of northeastern France named after the Ardennes forest. Its prefecture is the city of Charleville-Mézières.

Ardennes is one of the original 83 departments created during the French Revolution on 4 March 1790 with Mézières as is capital. It was formed with the former province of Champagne, the principalities of Sedan and Argonne and other territories.

It was divided in six districts: Charleville, Grandpré, Rethel, Rocroi, Sedan and Vouziers.

On 10 September 1926, the arrondissements of Rocroi and Sedan were eliminated but in 1942 Sedan was made again an arrondissement.

The communes of Charleville and Mézières are joined to form the new commune of Charleville-Mézières; it was named the capital of the department.

The department borders with Belgium (Namur and Luxembourg provinces) and 3 other departments in 2 regions:

Several rivers flow through the department; the main rivers are the Meuse, in the north, and the Aisne, in the south.

The Köppen climate classification type for the climate at Charleville-Mézières is an "Oceanic climate" (also known as Marine West Coast Climate) and of the subtype "Cfb".

Ardennes is managed by the Departmental Council of Ardennes in Charleville-Mézières. The department is part of the Grand Est region.

There are 4 arrondissements (districts), 19 cantons and 452 communes (municipalities) in Ardennes.

The following is a list of the 19 cantons of the Ardennes department (with their INSEE codes), following the French canton reorganisation which came into effect in March 2015:

The inhabitants of the Ardennes department are known, in French, as Ardennais (women: Ardennaises),

Evolution of the population in the Ardennes 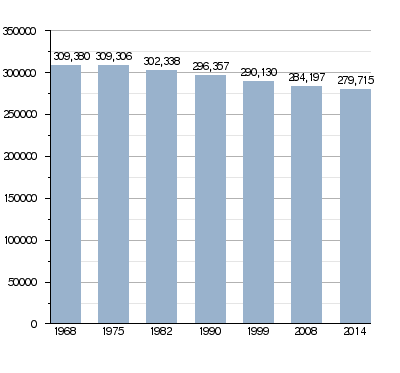 The main communes in the department are:

All content from Kiddle encyclopedia articles (including the article images and facts) can be freely used under Attribution-ShareAlike license, unless stated otherwise. Cite this article:
Ardennes (department) Facts for Kids. Kiddle Encyclopedia.