Sedan is a town and commune in France, a part of the Ardennes department in northern France.

Sedan was built in 1424. In the sixteenth century Sedan was a safe place for Protestants escaping from the Wars of Religion.

Until 1651, the Principality of Sedan belonged to the La Tour d'Auvergne family. It was independent. The most famous member of the family, Marshal Turenne, was born at Sedan on 11 September 1611. With help from the Holy Roman Empire, Sedan defeated France at the Battle of La Marfée. Immediately after that it was surrounded, and its prince, Frederic, surrendered to France. Only a year after that, it became part of France in return for sparing Frederic's life after he was in a plot against France.

During the Franco-Prussian War, on 2 September 1870 the French emperor Napoleon III was taken prisoner with 100,000 of his soldiers at the Battle of Sedan.

Because of this major victory, which also made the "Second Reich" of Germany possible, 2 September was declared "Sedan Day" (Sedantag) and a national German holiday in 1871. It remained a holiday until 1919.

In World War II the German army invaded neutral Belgium and crossed the Meuse River in Sedan. This allowed them to get past the French fortification system, called the Maginot Line. 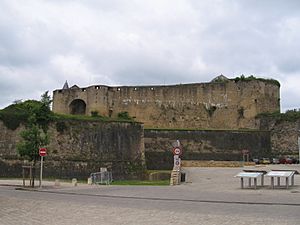 Sedan Castle may be the biggest of its kind in Europe with a total area of 30,000 square metres on seven levels. Building started in 1424 and the castle's defences were improved over the years. It is the only part left of the huge fortifications that there were in Sedan and around Sedan.

Sedan was a centre of cloth production, which was started under Cardinal Mazarin. It supported the town until the late nineteenth century.

These people were born in Sedan:

All content from Kiddle encyclopedia articles (including the article images and facts) can be freely used under Attribution-ShareAlike license, unless stated otherwise. Cite this article:
Sedan, France Facts for Kids. Kiddle Encyclopedia.