Marne is a department in northeastern France named after the river Marne which flows through the department. The prefecture (capital) of Marne is Châlons-en-Champagne (formerly known as Châlons-sur-Marne).

The Champagne vineyards producing the world-famous sparkling wine are located within Marne.

Marne is one of the original 83 departments created during the French Revolution on 4 March 1790 with Châlons-sur-Marne as is capital. It was formed with part of the former province of Champagne.

In 1800, with the creation of the arrondissements in France, the six districts were changed into five arrondissements: Châlons-sur-Marne, Épernay, Reims, Sainte-Menehould and Vitry-le-François.

In 1995, the name of Châlons-sur-Marne was changed to Châlons-en-Champagne but it was rejected in 1997. But, finally, this change was accepted in 1998.

The Marne department is in the Grand Est region after being part of the Champagne-Ardenne region till 2016. It is bordered by 3 regions and 6 departments: 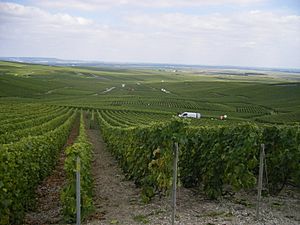 There are three geographic regions in the department:

The Marne river flows through the department from the southeast to the west.

This area is characterized by climates with few extremes of temperature. The Köppen climate classification type for the climate at Châlons-en-Champagne is a "Marine West Coast Climate" and of the subtype "Cfb".

Marne is managed by the General Council of Marne in Châlons-en-Champagne. The department is part of the Grand Est region.

There are 5 arrondissements (districts), 23 cantons and 617 communes (municipalities) in Marne.

The following is a list of the 23 cantons of the Marne department, following the French canton reorganisation which came into effect in March 2015:

All content from Kiddle encyclopedia articles (including the article images and facts) can be freely used under Attribution-ShareAlike license, unless stated otherwise. Cite this article:
Marne Facts for Kids. Kiddle Encyclopedia.