Namur (Dutch: Namen; Walloon: Nameur) is a province of Belgium on the border with France. It is one of the five provinces of Wallonia, the predominantly French-speaking southern region of Belgium.

The origin of the province of Namur goes back to 1795, when the Austrian Netherlands and the Principality of Liège joint the French Republic; they were made part of the old department of Sambre-et-Meuse.

At the fall of the First French Empire, the department is dissolved and replaced by the Province of Namur, at the time of the United Kingdom of the Netherlands. The province of Namur was one of the province created by the Constitution of 24 August 1815 of the Kingdom.

When the United Kingdom of the Netherlands ended after the 1830 Belgian Revolution, the province of Namur became part of the new Kingdom of Belgium.

Namur borders (clockwise from the West) on the Walloon provinces of Hainaut, Walloon Brabant, Liège and Luxembourg in Belgium, and on France.

Its capital is the city of Namur; other important cities are Dinant, Philippeville, Gembloux, Ciney and Andenne.

The province of Namur is divided into 3 arrondissements and a total of 38 municipalities. 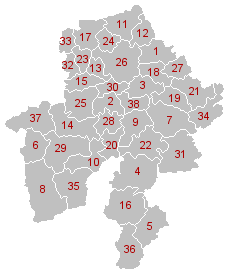 All content from Kiddle encyclopedia articles (including the article images and facts) can be freely used under Attribution-ShareAlike license, unless stated otherwise. Cite this article:
Namur (province) Facts for Kids. Kiddle Encyclopedia.