Cerfontaine is a Walloon municipality located in Belgium in the province of Namur. On January 1, 2006, Cerfontaine had a total population of 4,546. The total area is 83.45 km² which gives a population density of 54 inhabitants per km².

The Eau d'Heure lakes are situated partly in this municipality and partly in neighbouring Froidchapelle. 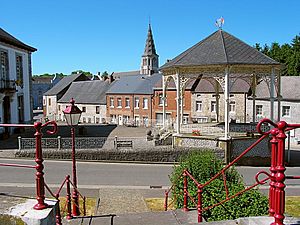 Rue du Moulin, the pavilion and the St. Lambertus church

All content from Kiddle encyclopedia articles (including the article images and facts) can be freely used under Attribution-ShareAlike license, unless stated otherwise. Cite this article:
Cerfontaine Facts for Kids. Kiddle Encyclopedia.