Though the place where is Chalon-sur-Saône now was an important town of the Aedui (Celtic people that lived between the Saône and Loire rivers) and objects of La Tène culture have been found here, the first mention of the town, as Cavillonum or Cabillonum, is found in Julius Caesar's Gallic Wars (VII, chs. 42 and 90).

The climate of Chalon-sur-Saône, in the Köppen climate classification, is Cfb - Oceanic climate with template summers.

The inhabitants of Chalon-sur-Saône are known, in French, as Chalonnais (women: Chalonnaises). 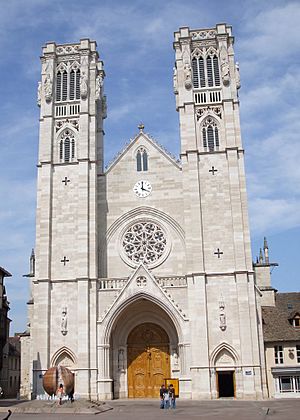 Chalon-sur-Saône is a subprefecture of the Saône-et-Loire department since 1800. It is also the capital of four Cantons:

Some interesting places in Chalon-sur-Saône are:

Chalon-sur-Saône is a twin town of:

All content from Kiddle encyclopedia articles (including the article images and facts) can be freely used under Attribution-ShareAlike license, unless stated otherwise. Cite this article:
Chalon-sur-Saône Facts for Kids. Kiddle Encyclopedia.