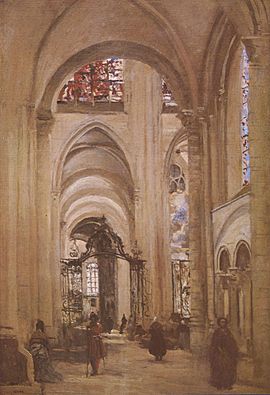 Inside the cathedral of Sens, Jean-Baptiste-Camille Corot, c. 1874.

Sens is a commune in the Yonne department in Bourgogne-Franche-Comté in north-central France, 120 km from Paris.

Sens is a sub-prefecture and the second city of the department, the sixth in the region. It is crossed by the Yonne and the Vanne, which empties into the Yonne here.

The city is said to have been one of the oppida of the Senones, one of the oldest Celtic tribes living in Gaul. It is mentioned as Agedincum by Julius Caesar several times in his Commentarii de Bello Gallico. The Roman city was built during the first century BC and surrounded by walls during the third. It still retains today the skeleton of its Roman street plan. The site was referred to by Ammianus Marcellinus as Senones (oppidum Senonas), where the future emperor Julian faced an Alamannic siege for a few months, but it did not become an administrative center until after the reorganization of the Roman Empire in 375, when it was the chief town of Lugdunensis Quarta.

During the Middle Ages its archbishops held the prestigious role of primate of Gaul and Germany. The Hôtel de Sens in Paris was their official residence in that city. The Archdiocese of Sens ruled over the dioceses of Chartres, Auxerre, Meaux, Paris, Orléans, Nevers and Troyes, summarized by the acronym CAMPONT .

Starting from 1135, the cathedral of Sens, dedicated to Saint Stephen, was rebuilt as one of the first Gothic cathedrals. There, in 1234, Louis IX of France celebrated his wedding to Marguerite of Provence. Sens witnessed the trial of Peter Abelard. Pope Alexander III sojourned for some time in the city, and there also Thomas Becket spent part of his exile between 1162 and 1165. The Archdiocese of Sens hosted a number of church councils and the first Archbishop of Upsalla was consecrated there. William of Sens was the principal architect of Canterbury Cathedral.

Sens experienced troublesome times during the Wars of Religion.

The city declined after Paris was elevated to archdiocese in 1622. Since 2002 Sens remains an archbishopric (though the incumbent resides in Auxerre since 1929?) but with no metropolitical function (no pallium or marriage appeals).

Despite the creation of new regions, Sens remains subject to the Paris cour d'appel.

All content from Kiddle encyclopedia articles (including the article images and facts) can be freely used under Attribution-ShareAlike license, unless stated otherwise. Cite this article:
Sens Facts for Kids. Kiddle Encyclopedia.