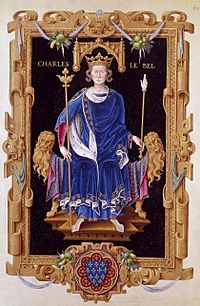 During his six years as king Charles IV raised taxes and took away land from people he did not like. In 1323 he made the Jews leave France because people thought they made secret plans with lepers and Muslims, although they did not really do those things.

Charles died without a son so there were questions about who would be the next king. He had two daughters, but the Salic law said daughters could not rule. Edward III of England then believed he had the right to become the new king of France, that was the beginning of the Hundred Years' War.

All content from Kiddle encyclopedia articles (including the article images and facts) can be freely used under Attribution-ShareAlike license, unless stated otherwise. Cite this article:
Charles IV of France Facts for Kids. Kiddle Encyclopedia.