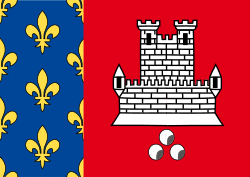 Vincennes is a city in France. right next to Paris, with about 50.000 people. Today, the city is known for the Château de Vincennes, which was there before the city, and which has an important role in the history of France. The city also gave its name to the Bois de Vincennes, the largest park in Paris.

All content from Kiddle encyclopedia articles (including the article images and facts) can be freely used under Attribution-ShareAlike license, unless stated otherwise. Cite this article:
Vincennes Facts for Kids. Kiddle Encyclopedia.