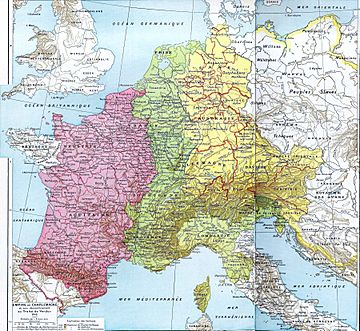 Middle Francia was the part of the Frankish Empire that fell to Lothair I. He was the eldest son and successor of Emperor Louis the Pious. Because of Lothair's Imperial title, Middle Francia had the imperial cities of Aachen, the residence of Charlemagne, as well as Rome.

In 855, Emperor Lothair I again split his realm amongst his sons. He gave the Kingdom of Italy with Rome to his eldest son, Louis II the Younger, crowned emperor since 850. Most of the lands north of the Alps went to Lothair II. Provence and Burgundy went to Charles.

Unlike East and West Francia, Middle Francia was a kingdom only a short time. Over the next centuries its lands were added into the Holy Roman Empire.

All content from Kiddle encyclopedia articles (including the article images and facts) can be freely used under Attribution-ShareAlike license, unless stated otherwise. Cite this article:
Middle Francia Facts for Kids. Kiddle Encyclopedia.