Kids Encyclopedia Facts
This page is about the town in Cambridgeshire. For the village in Cornwall, see St Neot, Cornwall. For the ninth century monk, see Saint Neot (monk).

St Neots is a town in the Huntingdonshire District of the county of Cambridgeshire, England. It lies about 50 miles (80 km) north of London and about 18 miles (29 km) west of Cambridge. The districts of Eynesbury, Cambridgeshire, Eaton Ford and Eaton Socon were formerly independent but nowadays are considered merged into St Neots.

The town is close to the intersection of the A1 road (north-south) the A421 / A428 roads which link Cambridge to Bedford and Milton Keynes on an east to west axis. St Neots has a railway station on the East Coast Main Line with typically half-hourly services to Peterborough, Stevenage and London. The River Great Ouse runs through the town.

St Neots is estimated to have a population of 36,110 (forecast 2021 population) and is one of the largest towns in Cambridgeshire, after the cities of Peterborough and Cambridge.

The town is named after the ninth century monk Saint Neot, whose bones were brought to St Neots Priory from Cornwall in around 980 AD, resulting in pilgrims visiting in large numbers. Previously the whole town had been called Eynesbury, but the fame of Neot's relics led to that part of the town being called St Neots. In more recent times the town name St Neots is understood to encompass the whole community.

St Neots has a weekly market and a good range of shops which led to it becoming a significant regional shopping town, although the general transfer to internet shopping has led to some decline in recent years. 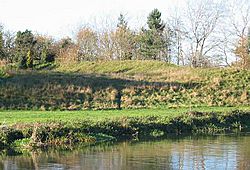 Remains of the Norman castle at Eaton Socon

Roman, Saxon and Medieval finds have also been made in and around St Neots. Early Saxon developments were in Eynesbury, Eaton Socon and Eaton Ford, which still exist as part of the town today; and Maltman's Green and Crosshall Ford which are no longer recognised.

The Anglo Saxon Chronicles record that in 917 the Danish King of East Anglia left Huntingdon to attack Saxon settlements but was defeated and killed at the Battle of Tempsford near St Neots. The Normans rebuilt the Priory near the river and, in 1113, the Priory of St Neots was given its own manor, separate from Eyenesbury, which it had previously been part of. The town formed was named St Neots, and remained partially entwined with Eynesbury until approximately 1204, when the two parishes were formally separated. A castle was built in the 12th century on the riverbank at Eaton (modern Eaton Socon). The earth mound remnants of this still exist today.

The parish church was rebuilt in the 15th century, and is one of the few currently extant churches of this period in England. A large part of the original church remains, including stained glass windows depicting the life of Christ.

The Great Ouse was made navigable from St Ives to Bedford, via St Neots, in 1629, increasing river-borne trade in the town.

The separate village of Eynesbury became re-incorporated into St Neots in 1876. 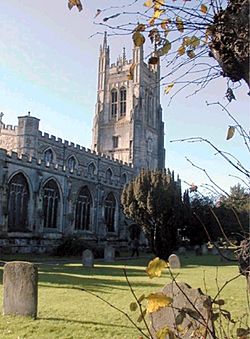 Eaton Ford and Eaton Socon, two villages across the county boundary formed by the River Great Ouse in Bedfordshire, were merged into St Neots in 1965.

Technology-based industries are located in some of the town's light industrial estates, and there is a gas turbine power station at Little Barford on the edge of the town. Recent development has added Eynesbury Manor, Love's Farm, and the Island, Little Paxton bringing the population above 40,000. It is projected that the population of the town will be 65,000 by the end of the Huntingdonshire Local Plan period (2036).

St Neots is situated approximately 49 miles north of London. It is close to the south-western boundary of Huntingdonshire District, and both the city of Cambridge and the county town of Bedford are nearby.

St Neots lies in the valley of the River Great Ouse, partly on the flood plain and partly on slightly higher ground a little further from the water. The Great Ouse is a mature river, once wide and shallow but now controlled by weirs and sluices and usually constrained in a well-defined channel. 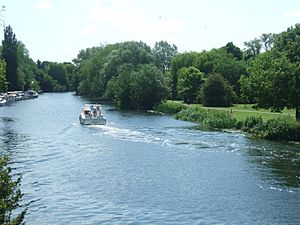 Tributaries entering the Great Ouse in the town are the River Kym, Hen Brook, Duloe Brook and Colmworth Brook. The area is generally low-lying. The Riverside Fields, an amenity area adjacent to St Neots Bridge, is designed as a flood buffer area, and is under water at times of flood, protecting dwelling and commercial property from flood.

St Neots developed at the site of a ford where overland routes converged. This was replaced by a medieval bridge, and today there are two further crossings just outside the town, one to the north and another to the south.

The soil is mainly light, overlying gravel beds, and gravel extraction is one of the local industries. Older disused gravel pits form useful nature reserves and amenity areas at nearby Paxton Pits and at the Wyboston Leisure Park. Away from the river, the higher land is mainly a heavy clay soil with few large settlements. Much of the land is used for arable farming.

The climate in the United Kingdom is defined as a temperate oceanic climate, or Cfb on the Köppen climate classification system, a classification it shares with most of northwest Europe. Eastern areas of the United Kingdom, such as East Anglia, are drier, cooler, less windy and also experience the greatest daily and seasonal temperature variations. Protected from the cool onshore coastal breezes further to the east of the region, Cambridgeshire is warm in summer, and cold and frosty in winter.

A new footbridge opened in February 2014, linking the Love's Farm housing development and Rowley Park Stadium to the railway station and the rest of the town, as well as providing lifts to all platforms. 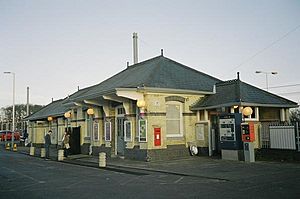 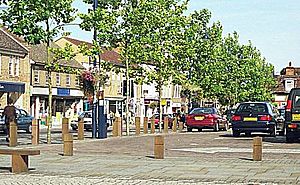 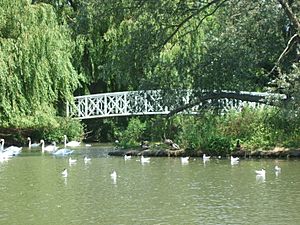 St Neots is bypassed by the A1 which links the town by road with London to the South and Peterborough to the North, while the nearby A14 provides access to the Midlands and East Anglia.

Until the three-mile £8m A45 St Neots Bypass opened in December 1985 (subsequently re-designated as the A428), traffic to and from Cambridge had to pass through the town centre.

The A421 begins at Black Cat Roundabout on the A1 just South of the town, connecting with Bedford and Milton Keynes, and carrying much of the traffic between Oxford and Cambridge.

Regular local buses are provided by Stagecoach in Huntingdonshire and Go Whippet. St Neots is served by the cross country X5 service that runs between Cambridge and Oxford.

There is also the Route 66, run by Stagecoach which goes into Huntingdon.

A foot and cycle bridge across the River Great Ouse was opened in 2011, connecting the communities of Eaton Socon and Eynesbury. A public consultation on the scheme was held in 2003 with public exhibitions held in December 2008. The new bow string arch bridge has a span of 346 m (1,135 ft) (including access ramps), and includes lighting and improvements to the connecting cycle paths.

The scheme was supported by Cambridgeshire County Council, Huntingdonshire District Council and is a Sustrans Connect2 project. The bridge had an estimated construction cost of £3.5 million with Sustrans contributing an additional £700,000. The construction started in January 2011 and was completed on time and within budget during September 2011. The use of a Compulsory Purchase Order for the necessary land was approved. The route of the cycle way has connected Shakespeare Road, in Eaton Socon, to Barford Road, in Eynesbury and follows the southern boundary of St Neots Community School.

The Rowley Arts Centre was opened in May 2014. The development includes a piazza walkway line with popular national chain restaurants and state-of-the-art cinema complex. The development is named after Peter Rowley, an American playwright, author and critic who was Lord of the Manor of St Neots. He donated £1 million towards the development.

The cinema contains six screens capable of accommodating a total 900 people. The build specification is in accordance with Cineworld deluxe standard and nearly all screens are equipped with latest 3D projection. The Rowley Auditorium also provides a venue for live performances which has adapted seating area and spotlighting. There are also lifts and box seating for disabled visitors.

St Neots Museum, housed in the town's Victorian Police Station and Magistrates Court, has local history collections covering the towns rich past including a display about James Toller, the Eynesbury Giant, a resident from the 18th century who measured over 8 ft in height. There is also a gallery with temporary exhibitions by local creatives including fine art, ceramics, sculpture and illustration.

Local notable music venues include the Priory Centre, and has been host to many great entertainers as well as holding productions by local amateur dramatic groups and the Pig and Falcon, which has live music every Wednesday, Friday and Saturday and regular open mic nights.

There is a thriving theatre community with four active groups – Riverside Theatre Company who stage productions, run workshops and have groups for all ages; VAMPS formed in 1961 as the St Neots and District Operatic Society and stage popular musicals and variety shows; award-winning, St Neots Players, formed in the late 1920s as a play-reading group with past members who used to perform the annual Shakespeare, Pantomime and other mid-season productions at the Kings Head Hotel in the Stables Theatre; and Stageworks, a performing arts group offering classes, holiday programmes, workshops and a college offering full-time training to students aged 16 years and over that prepares students for musical theatre and acting.

The local creative community is served by art youth club, Vir2oso, which runs regular workshops and clubs for 8 and 17 year-olds at the Bargoves Centre and aims to encourage and support children who feel despondent and dejected in their school life and those with learning difficulties. There is also Neotists, a group for creative professionals with members covering design, illustration, art, photography and IT, which commissions local creatives to collaborate on projects, run workshops and events for the community and provide opportunities and connections for professionals working in the creative industry. 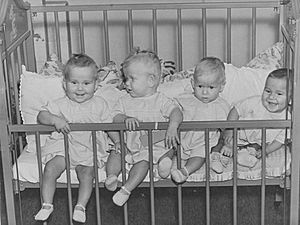 In 1935 quadruplets were born to Mr and Mrs Miles, in Eynesbury. This caused a media sensation at the time, and they were the first British quadruplets to survive more than a few days. As they were very premature, the family doctor arranged for special medical care to be put in place in his own home at first. They were in demand for publicity purposes throughout their childhood and appeared several newsreels. In fact they are alive at the present day (2021) and are the oldest quadruplets in the world. 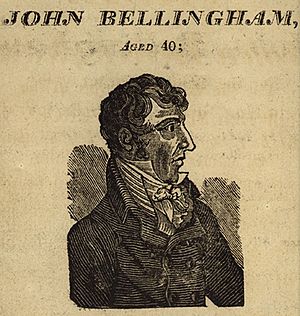 St Neots is responsible for the upbringing of the only man to assassinate a British Prime Minister. John Bellingham was born in the town and killed Prime Minister Spencer Perceval at the House of Commons on 11 May 1812; Bellingham blamed Perceval for the refusal of the Government to compensate him for his personal financial misfortunes.

All content from Kiddle encyclopedia articles (including the article images and facts) can be freely used under Attribution-ShareAlike license, unless stated otherwise. Cite this article:
St Neots Facts for Kids. Kiddle Encyclopedia.