Panorama from above burial chamber in 2014 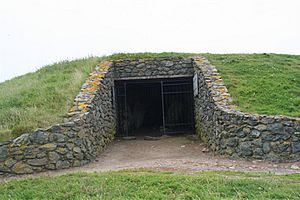 Barclodiad y Gawres (Welsh for "The Giantess's Apronful") is a Neolithic burial chamber between Rhosneigr and Aberffraw on the south-western coast of the island of Anglesey in North Wales. It is an example of a cruciform passage grave, a notable feature being its decorated stones. Similar graves and marks exist across the Irish Sea in the Boyne Valley.

Full excavations were performed in 1952–53, after which the chamber was re-roofed with concrete and covered with turf to resemble the original structure. During the excavations two cremated young male burials were found within the south-western side-chamber. The central area of the main chamber contained the remains of a fire on which had been poured a stew which had been made with wrasse, eel, frog, toad, grass snake, mouse, shrew and hare, then covered with limpet shells and pebbles.

During the excavations five stones with carvings—spirals, zig-zags, lozenges and chevrons—were discovered. A sixth stone with carvings was discovered in 2001.

More or less equidistant from Aberffraw and Rhosneigr, it is on the north side of Porth Trecastell, on the Anglesey Coastal Path, and a short walk from the A4080. It is cared for by the Welsh heritage organisation Cadw. From April to October at weekends and bank holidays it is possible to enter the chamber, if accompanied by a keyholder (from the Wayside shop in Llanfaelog).

All content from Kiddle encyclopedia articles (including the article images and facts) can be freely used under Attribution-ShareAlike license, unless stated otherwise. Cite this article:
Barclodiad y Gawres Facts for Kids. Kiddle Encyclopedia.