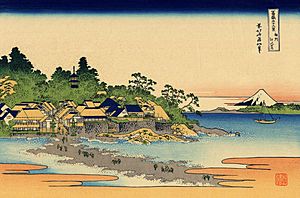 "Enoshima in Sagami Province" by Hokusai, circa 1830

Enoshima (江の島code: ja is deprecated ) is a small island in Sagami Bay on the Pacific Coast of the Japanese island of Honshu. It is part of Fujisawa in Kanagawa Prefecture.

Enoshima has an area of about 0.2 km². It is linked to the mainland by a bridge.

The island is at the mouth of the Katase River.

In 1927, Enoshima was recognized as one of the 100 Landscapes of Japan which best showed Japan and its culture in the Shōwa period.

Panoramic view of Enoshima Island with bridge connecting it to Katase

All content from Kiddle encyclopedia articles (including the article images and facts) can be freely used under Attribution-ShareAlike license, unless stated otherwise. Cite this article:
Enoshima Facts for Kids. Kiddle Encyclopedia.