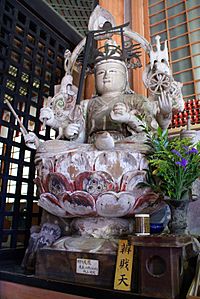 Benzaiten (弁才天, 弁財天) is the Japanese name of the goddess Saraswati. Worship of Benzaiten arrived in Japan in the 6th to 8th centuries, mainly through the Chinese translations of the Sutra of Golden Light .

Her Sanskrit name is "Sarasvatî Devî", which means "flowing water". This is why Benzaiten is the goddess of everything that flows: water, words, speech, and music. The characters used to write her name showed her as the goddess of eloquence. Because of the Sutra of Golden Light, in Japan she became a protector of the people. Lastly, she became one of the Seven Lucky Gods.

In the Rig-Veda (6.61.7) Sarasvati killed the three-headed snake, also known as Vritra. This is probably one of the sources of Sarasvati/Benzaiten's close link with snakes and dragons in Japan. She has a shrine on the Island of Enoshima in Sagami Bay, about 50 kilometers south of Tokyo; and a five-headed dragon and her are the main people in the Enoshima Engi, a history of the shrines on Enoshima written by the Japanese Buddhist monk Kokei (皇慶). According to Kokei, Benzaiten is the third daughter of the dragon-king of Munetsuchi (無熱池; literally "lake without heat"), the lake which is at the center of the world in an ancient Buddhist view.

All content from Kiddle encyclopedia articles (including the article images and facts) can be freely used under Attribution-ShareAlike license, unless stated otherwise. Cite this article:
Benzaiten Facts for Kids. Kiddle Encyclopedia.