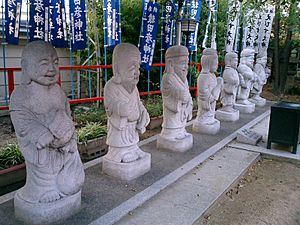 The Seven Lucky Gods at Watatsumi Shrine in Tarumi-ku, Kobe

The Seven Gods of Fortune (七福神code: ja is deprecated , Shichi Fukujin), commonly called the Seven Lucky Gods in English, refer to the seven gods of good fortune in Japanese mythology and folklore. They are often the subject of netsuke carvings.

Each has a traditional characteristic:

Many figures in Japanese myth were transmitted from China (some having entered China from India), including all of the Seven Lucky Gods except Ebisu. Another god, Kichijōten, goddess of happiness, is sometimes found depicted along with the seven traditional gods, replacing Jurōjin.

The seven gods are often pictured on their ship, the Takarabune (宝船), or "Treasure Ship." The tradition says that the seven gods will arrive in town on the New Year and distribute fantastic gifts to worthy people. Children often receive red envelopes bearing the Takarabune which contain gifts of money around the New Year. The Takarabune and its passengers are often shown in art in different locations, from the walls of museums to cuddly caricatures. 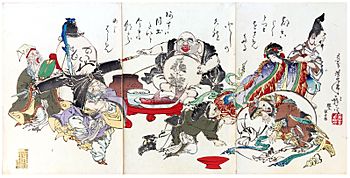 The Seven Lucky Gods, in an 1882 print by Tsukioka Yoshitoshi.

All content from Kiddle encyclopedia articles (including the article images and facts) can be freely used under Attribution-ShareAlike license, unless stated otherwise. Cite this article:
Seven Lucky Gods Facts for Kids. Kiddle Encyclopedia.