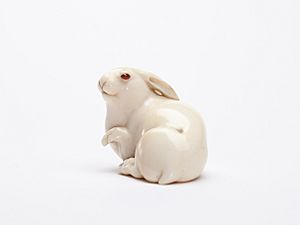 Netsuke are miniature sculptures that were invented in 17th-century Japan to serve a practical function.

Traditional Japanese garments—robes called kosode and kimono—had no pockets; however, men who wore them needed a place to store their personal belongings, such as pipes, tobacco, money, seals, or medicines. Their solution was to place such objects in containers (called sagemono) hung by cords from the robes' sashes (obi). The containers may have been pouches or small woven baskets, but the most popular were beautifully crafted boxes (inrō), which were held shut by ojime, which were sliding beads on cords. Whatever the form of the container, the fastener that secured the cord at the top of the sash was a carved, button-like toggle called a netsuke.

Netsuke, like the inrō and ojime, evolved over time from being strictly utilitarian into objects of great artistic merit and an expression of extraordinary craftsmanship. Such objects have a long history reflecting the important aspects of Japanese folklore and life. Netsuke production was most popular during the Edo period in Japan, around 1615–1868. Today, the art lives on, and some modern works can command high prices in the UK, Europe, the USA, Japan and elsewhere. Inexpensive yet faithful reproductions are available in museums and souvenir shops.

Okimono, small and purely decorative sculptures, were often made by the same artists who produced netsuke.

The term is formed from the two Japanese characters ne+tsuke, meaning "root" and "to attach". In English the word may be italicized or not, with American English tending to favour the former and British English the latter. 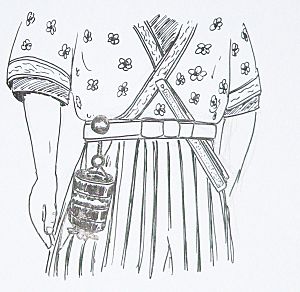 Drawing of a man wearing an inrō supported by a netsuke passed through the ties of his hakama. 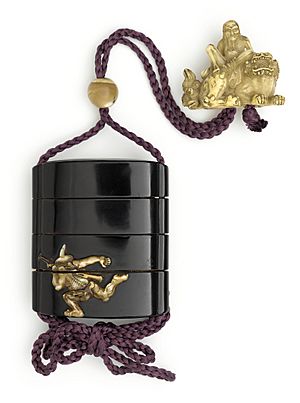 According to Bushell (13/ 2:6), "The literal translation... is seapine.... Whether literal or figurative the translation is a misnomer, as the material is, in actuality, a coral formed by skeletons of living organisms.... In color, umimatsu, black coral, is black or blackish brown, sometimes showing streaks of light brown or dirty yellow." Bushell goes on: "As material, umimatsu is more acceptable to collectors than carvers. Leading carvers naturally avoided the material. It was prone to crack, crumble or chip. Carvers find that it is risky for carving details and subtle effects. Perfect pieces of black coral were difficult to obtain." 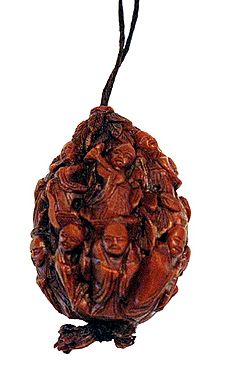 Like many other art forms, netsuke reflect the nature of the society that produced them. This effect is particularly pronounced in netsuke, owing to long periods of isolation imposed both by geography and internal politics and limited avenues of self-expression for Japanese citizens due to custom and law. As a result, netsuke display every aspect of Japanese culture, including its rich folklore and religion, crafts, trades, and professions, all types of people and creatures, both real and imagined, and every kind of object. As in other aspects of Japanese culture, the subjects portrayed by netsuke trend, over the long term, away from an initial emphasis on motifs of Chinese derivation toward a focus on objects of more strictly national interest.

Some netsuke represent single, simple, objects, and some depict entire scenes from history, mythology, or literature.

All content from Kiddle encyclopedia articles (including the article images and facts) can be freely used under Attribution-ShareAlike license, unless stated otherwise. Cite this article:
Netsuke Facts for Kids. Kiddle Encyclopedia.