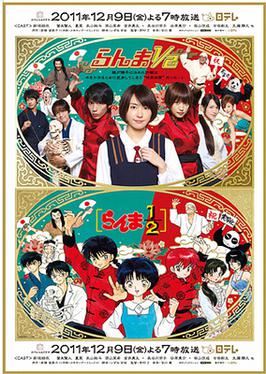 Poster for the Ranma ½ TV drama, featuring the cast and artwork by Rumiko Takahashi.

Ranma ½ is an anime based on a manga by Rumiko Takahashi. It is 36 volumes long.

Ranma Saotome is the main character, who is 16 and good at martial arts. He learned from his father, a martial artist. Ranma was training with his father, Genma Saotome, when he falls into a spring which turns him into a girl from then on whenever cold water is poured on him. Genma fell into the spring of the panda, so he turns into a panda. Hot water makes them turn back.

After this both visit Soun Tendo, Genma's friend from a long time ago and his fighting partner. Soun teaches at his martial arts school. Soun tells Genma that he needs a grandchild to carry on the school, so he needs his daughter, Akane Tendo, to marry to get a child, who would receive an inheritance from him. Genma then says that Akane could marry Ranma, and so they become engaged.

Ranma and Akane don't get along at first but they become more friendly.

Ryoga Hibiki One of Ranma's enemies. He and Ranma went to same school when they were children, but never got along.

All content from Kiddle encyclopedia articles (including the article images and facts) can be freely used under Attribution-ShareAlike license, unless stated otherwise. Cite this article:
Ranma ½ Facts for Kids. Kiddle Encyclopedia.