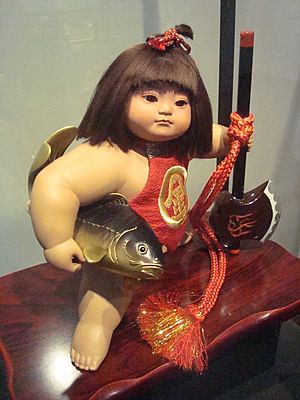 Kintarō, often translated as "Golden Boy" is a folk hero from Japanese folklore. A child of superhuman strength, he was raised by a yama-uba ("mountain witch") on Mount Ashigara. He became friendly with the animals of the mountain, and later, after catching Shuten-dōji, the terror of the region around Mount Ōe, he became a loyal follower of Minamoto no Yorimitsu under the new name Sakata no Kintoki.

He is a popular figure in Bunraku and kabuki drama, and it is a custom to put up a Kintarō doll on Boy's Day in the hope that boys will become equally brave and strong.

Kintarō is supposedly based on a real person, Sakata Kintoki, who lived during the Heian period and probably came from what is now the city of Minamiashigara, Kanagawa. He served as a retainer for the samurai Minamoto no Yorimitsu and became well known for his abilities as a warrior. As with many larger-than-life individuals, his legend has grown with time. 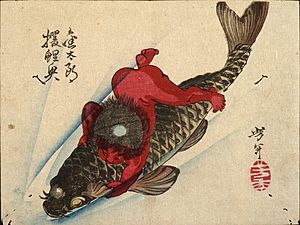 Kintarō is an extremely popular figure in Japan, and his image adorns everything from statues to storybooks, anime, manga to action figures. For example, the manga and anime Golden Boy stars a character with the same name.

Kintarō as an image is characterized with an ono, a haragake apron, and sometimes a tame bear. In many of Kintarō's pictures, it seems that he is trying to capture a giant black koi. This seems to glorify his strength as he is able to wrestle with such creature.

Kintarō candy has been around since the Edo period; no matter how the cylinder-shaped candy is cut, Kintarō's face appears inside.

Japanese tradition is to decorate the room of a newborn baby boy with Kintarō dolls on Children's Day (May 5) so that the child will grow up to be strong like the Golden Boy.

A shrine dedicated to the folk hero lies at the foot of Mount Ashigara in the Hakone area near Tokyo. Nearby is a giant boulder that was supposedly chopped in half by the boy hero himself.

All content from Kiddle encyclopedia articles (including the article images and facts) can be freely used under Attribution-ShareAlike license, unless stated otherwise. Cite this article:
Kintarō Facts for Kids. Kiddle Encyclopedia.