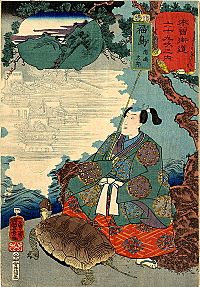 Urashima Tarō (浦島太郎code: ja is deprecated ) is a Japanese fairy tale about a fisherman who rescues a turtle and is rewarded with a visit to the Ryūgū-jō, the Dragon Palace. There are many different versions of this story.

One day, a fisherman named Urashima Taro was fishing when he noticed a turtle, which appeared to be in trouble. Taro saved the turtle and in return the turtle magically gave Taro gills and brought Taro to the Dragon Palace (Ryūgū-jō), deep underwater. The turtle turned out to be the daughter of Ryūgū-jō, a lovely princess. He stayed there with her for a few days, and received a mysterious box from her when he was leaving, which she told him never to open. What he did not realize that time in the Dragon Palace moves an awful lot slower than on land and when he returned 700 years had passed. When he got home he found that all of his family had died long ago. In grief, he opened the box. It revealed itself in a cloud of white smoke, it was his true age, and Urashima Taro aged and died.

All content from Kiddle encyclopedia articles (including the article images and facts) can be freely used under Attribution-ShareAlike license, unless stated otherwise. Cite this article:
Urashima Tarō Facts for Kids. Kiddle Encyclopedia.