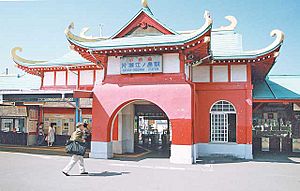 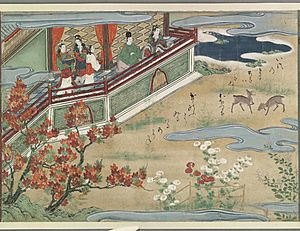 Urashima and Otohime in the Autumn side of the undersea palace, watching deer. Japanese watercolour from late 16th or early 17th century

Urashima Taro handscroll from Bodleian Library 6.jpg|thumbnail|left|The Winter side of the palace, with a light snow on the garden]]

In Japanese mythology, Ryūgū-jō (竜宮城) is the palace of Ryūjin, the dragon god of the sea. It is located under the sea. Depending on the version of the legend, it is built from red and white coral, or from solid crystal. Those that live in the palace were Ryūjin's servants, which were various creatures of the sea. On each of the four sides of the palace is a different season, and one day at the palace is like 100 years on earth. In legend, Urashima Tarō visits Ryūgū-jō.

All content from Kiddle encyclopedia articles (including the article images and facts) can be freely used under Attribution-ShareAlike license, unless stated otherwise. Cite this article:
Ryūgū-jō Facts for Kids. Kiddle Encyclopedia.