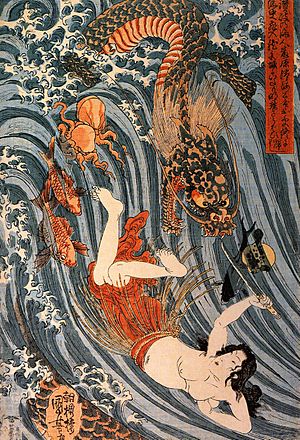 Ryūjin (Japanese 龍神 "dragon god", also called Rinjin and Owatatsumi) was the god of the sea in Japanese mythology. He was a dragon, a symbol of the power of the ocean, had a very big mouth, and could transform into human shape. Ryūjin lived in Ryūgū-jō, his palace under the sea built out of red and white coral, from where he was believed to control the tides with magical tide jewels. Sea turtles, fish and jellyfish were Ryūjin's servants.

Ryūjin was the father of the beautiful goddess Otohime who married the hunter prince Hoori. The first Emperor of Japan, Emperor Jimmu, is said to have been a grandson of Otohime and Hoori's. This means, Ryūjin is believed to be one of the ancestors of the Japanese imperial dynasty.

A legend about Ryūjin is the story about how the jellyfish lost its bones. This story tells that once, Ryūjin wanted to eat monkey's heart, and sent the jellyfish to get him a monkey. The monkey managed to escape from the jellyfish by telling him that he had put his heart in a jar in the forest, and offered to go and get it. When the jellyfish came back and told Ryūjin what had happened, Ryūjin became so angry that he beat the jellyfish until its bones were all broken.

All content from Kiddle encyclopedia articles (including the article images and facts) can be freely used under Attribution-ShareAlike license, unless stated otherwise. Cite this article:
Ryūjin Facts for Kids. Kiddle Encyclopedia.