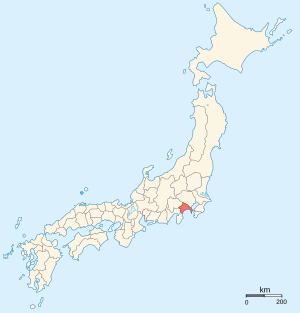 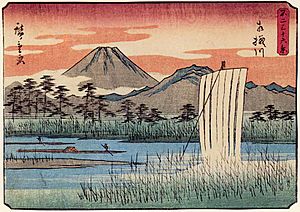 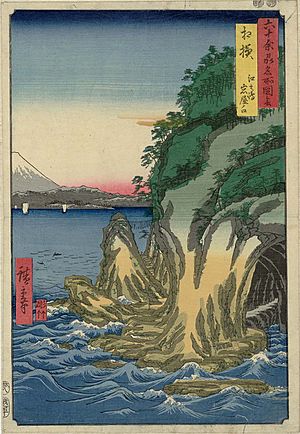 Ukiyo-e print by Hiroshige "Sagami" in The Famous Scenes of the Sixty States (六十余州名所図会), depicting Enoshima and Mount Fuji

The ancient capital city of the province was near Hiratsuka.

Sagami was one of the original provinces of Japan established in the Nara period under the Taihō Code.

In the Edo period, the Tōkaidō road was the main route between Kyoto and Edo. The road passed through Sagami.

All of Sagami became part of the new Kanagawa Prefecture in 1876.

In 1906, the Imperial Japanese Navy battleship Sagami was named after the province.

Samukawa jinja was the chief Shinto shrine (ichinomiya) of Hōki.

All content from Kiddle encyclopedia articles (including the article images and facts) can be freely used under Attribution-ShareAlike license, unless stated otherwise. Cite this article:
Sagami Province Facts for Kids. Kiddle Encyclopedia.