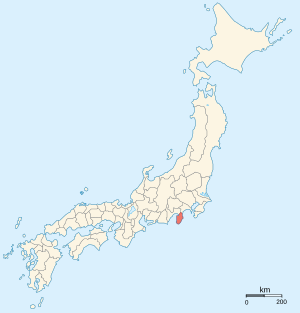 Izu Province (伊豆国, Izu-no kuni) was an old province of Japan in the area of Shizuoka Prefecture on the island of on Honshū. It was also known as Zushū (豆州).

Izu had borders with Sagami and Suruga Provinces. 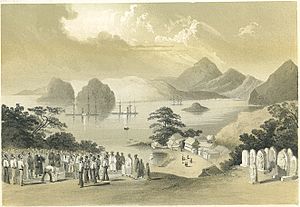 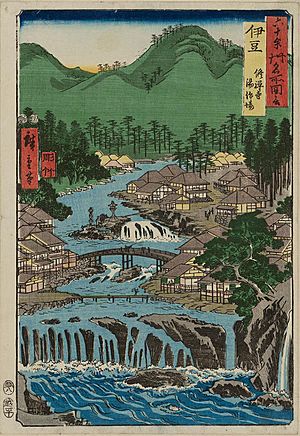 During the Edo period, the Tōkaidō road passed through northern Izu. Travelers from Edo to Kyoto stopped at the post town (shuku-eki) at Mishima.

In the 1850s, Shimoda was opened to American trade. The first American Consulate in Japan was opened at the temple of Gyokusen-ji in Shimoda.

The Izu Peninsula is today the eastern portion of Shizuoka Prefecture. The Izu Islands are considered part of Tokyo.

Mishima taisha was the chief Shinto shrine (ichinomiya) of Izu.

All content from Kiddle encyclopedia articles (including the article images and facts) can be freely used under Attribution-ShareAlike license, unless stated otherwise. Cite this article:
Izu Province Facts for Kids. Kiddle Encyclopedia.