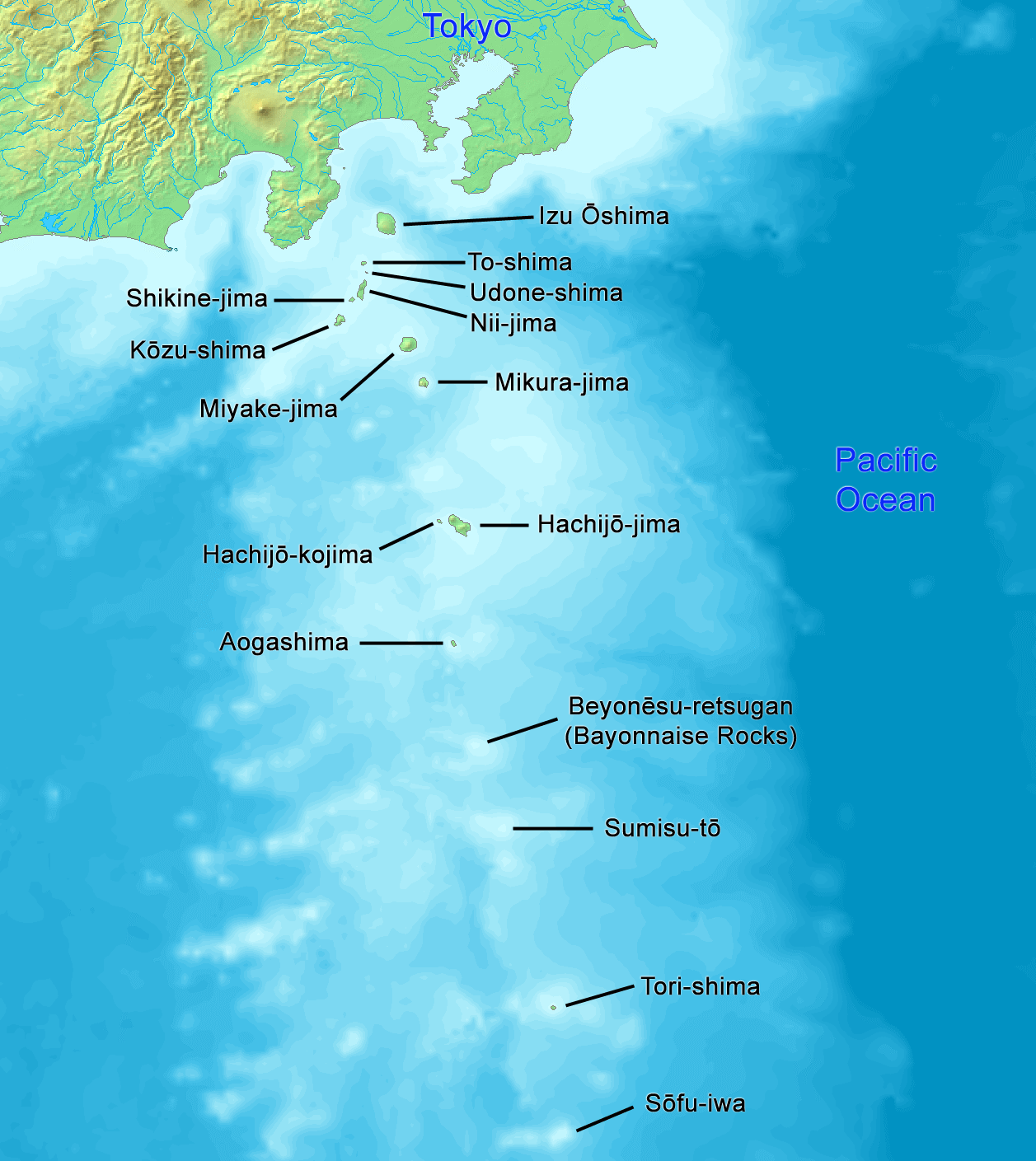 Map of the Izu Islands

The Izu Islands are a group of volcanic islands stretching south and east from the Izu Peninsula of Honshū, Japan. Administratively, they form two towns and six villages; all part of Tokyo Prefecture. The largest is Izu Ōshima, usually called simply Ōshima.

Although traditionally referred to as the "Izu Seven" (伊豆七島code: ja is deprecated , Izu Shichitō), there are in fact more than a dozen islands and islets. Nine among them are currently inhabited.

The largest of them is Izu Oshima (8,346 inhabitants, 91.06 km2 (35.16 sq mi)), the smallest Toshima (292 inhabitants, 4.12 km2 (1.59 sq mi).) Of the inhabited islands, seven are traditionally referred to as the "Izu Seven": Oshima, Toshima, Niijima, Kozujima, Miyakejima, Hachijojima, and Mikurajima, though Shikinejima and Aogashima are sometimes included as well.

During the Edo period, Nii-jima, Miyake-jima, and Hachijō-jima served as places of exile for criminals.

All the islands (more than a dozen in total) lie within the Fuji-Hakone-Izu National Park. The four southernmost islands are not administrated under any town or village in Hachijō Subprefecture, but are unincorporated areas. Torishima is now uninhabited but is an important bird refuge.

The subtropical Ogasawara Islands, which are also administratively part of Tokyo, lie further to the south. They form a far-flung archipelago of over thirty (30) islands some 1,000 km (621 mi) due south of Tokyo. 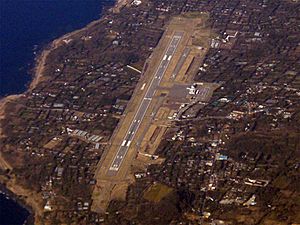 The primary industries are fisheries, agriculture, and tourism. The most scenic spots on the islands are crowded with tourists during summers. Popular tourist activities include swimming, scuba diving, surfing, fishing, bird watching and trekking.

Transportation between the islands, by cargo-passengers boats, jetfoils, and aircraft, is supported by harbours on all inhabited islands and five airports (small islands can be reached by helicopter).

There are 5 airports, 15 harbors, and 19 fishing ports. Flights from Tokyo take 30 minutes, while boats take 7–10 hours and jetfoils make the route in about two hours. Transportation on the islands is considered important to the quality of life, why about 215 km (134 mi) of paved main roads serve a kind of vehicles.

The islands occupy the northern portion of the Izu-Bonin-Mariana Arc which extends to the Izu Peninsula and Mount Fuji on the Honshū mainland which are northern extensions of the Izu volcanic arc. The Izu arc ends there at a tectonic triple junction.

Volcanic activity is frequent in the area. 31 people were killed when the research vessel Kaiyō Maru no 5 was destroyed during the 1953 eruption of Myōjin-shō. Volcanic activity, including the release of harmful gases, forced the evacuation of Miyake-jima in 2000. Residents were allowed to return permanently to the island in February 2005 but were required to carry gas masks in case of future volcanic emissions.

To handle the various types of natural disasters threatening the region, including tsunamis, storm, floods, and volcanism, Tokyo metropolitan government has developed prevention and safety measures, including hazard maps and evacuation guidance, radios, signs, and a transport system for emergency supplies.

All content from Kiddle encyclopedia articles (including the article images and facts) can be freely used under Attribution-ShareAlike license, unless stated otherwise. Cite this article:
Izu Islands Facts for Kids. Kiddle Encyclopedia.