Parfait ( from French meaning "perfect") is two types of frozen dessert; in France, where the dish originated, parfait is made by boiling cream, egg, sugar and syrup to create a custard-like puree which is not necessarily served in a parfait glass. The American version includes more ingredients like granola, nuts, yogurt and liqueurs made in combination with a topping of fruits or whipped cream that are layered and served in a tall glass. The oldest known recipe dates back to 1892. 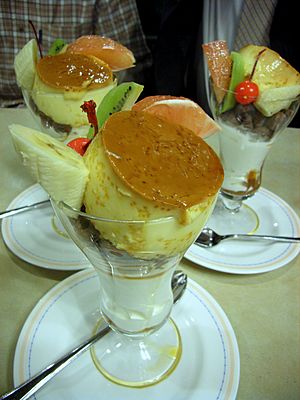 A common parfait is the French kind. A French parfait mixes sugar, whip cream, an egg yolk, sauce, cold fruit and frozen ice cream. French parfaits are usually served on a plate not in a glass.

Japanese parfait made mainly of ice cream and fruit with a sweet ingredient. It is served in a tall glass. It is a classic on a coffee shop menu. It is one of the more popular desserts.

All content from Kiddle encyclopedia articles (including the article images and facts) can be freely used under Attribution-ShareAlike license, unless stated otherwise. Cite this article:
Parfait Facts for Kids. Kiddle Encyclopedia.