Islam by country. The countries with more than 5% Muslims in the total population are shown. Sunnis are shown in shades of green, Shiites in shades of red. Shiites may be under-represented, because they do not always show up in statistics. The same applies to other Islamic movements. 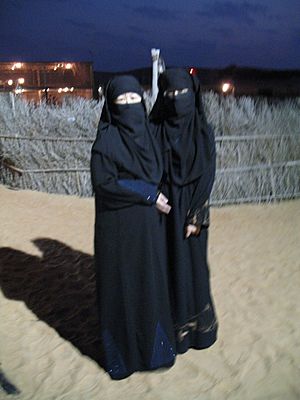 Sunni Islam (Arabic: أهل السنة‎code: ar is deprecated ) is the largest branch of Islam. They are the branch of Islam that came through the Rashidun Empire, which started with Abu Bakr and ended by Ali ibn Abi Talib. Sunni beliefs are based on the Qu'ran and the Kutub al-Sittah. Sunnis make up around 75% of all Muslims. With approximately 1.8 billion followers, it is the largest religious denomination of any religion in the world. Catholicism is the second-largest. There are four sub-groups within Sunni Islam; Malikis, Hanafis, Hanbalis and Shafi'is.

Adherents of Sunni Islam are Sunnis or Sunnites. The word Sunni comes from the word sunna (سنة), which means the tradition of the prophet of Islam, Muhammad. Sunnis are also called ahl as-sunnah wa l-jamāʻah (Arabic: أهل السنة والجماعة‎code: ar is deprecated ), which means people of tradition and congregation; this means that the Sunnis are united.

All content from Kiddle encyclopedia articles (including the article images and facts) can be freely used under Attribution-ShareAlike license, unless stated otherwise. Cite this article:
Sunni Islam Facts for Kids. Kiddle Encyclopedia.