Gavriil (Gavrila) Romanovich Derzhavin (Russian: Гаврии́л (Гаври́ла) Рома́нович Держа́вин; IPA: [ɡɐˈvrilə rɐˈmanəvʲɪtɕ dʲɪrˈʐavʲɪn]; 14 July 1743 – 20 July 1816) was one of the most highly esteemed Russian poets before Alexander Pushkin, as well as a statesman. Although his works are traditionally considered literary classicism, his best verse is rich with antitheses and conflicting sounds in a way reminiscent of John Donne and other metaphysical poets.

Derzhavin was born in the Kazan Governorate into a landed family of impoverished Russian nobility. His 15th-century ancestor Morza Bagrim, a Tatar who emigrated from the Great Horde to Muscovy, converted to Christianity and became a vassal of Grand Prince Vasily II. Bagrim was rewarded with lands for his service to the prince, and from him descended noble families of Narbekov, Akinfov and Keglev (or Teglev).

A member of the Narbekov family, who received the nickname Derzhava (Держа́ва; Дрьжа́ва; Russian for "orb" or "power"), was the patriarch of the Derzhavin family. The Derzhavins once held profitable estates along the Myosha River, about 25 miles (40 km) from the capital city of Kazan, but over time they were divided, sold or mortgaged. By the time Gavrila Derzhavin's father, Roman Nikolayevich Derzhavin, was born in 1706, he stood to inherit only a few parcels of land, occupied by few peasants. Roman joined the military and in 1742, at age 36, he married a widowed distant relative Fyokla Andreyevna Gorina (née Kozlova). She was from a similar background and also possessed a few scattered estates. The estates were the source of constant lawsuits, fights and feuds with neighbors, sometimes extending into violence.

Derzhavin was born nearly nine months after his parents were wed, but the location of his birth remains a point of dispute. Derzhavin considered himself a native of Kazan — which proudly proclaims itself as the city of his birth — but he was possibly born at one of his family's estates in Sokury or Karmachi, in Laishevsky County. The Laishevsky District is informally known as the Derzhavinsky District because of its association with Derzhavin. He was named Gavriil (Russian for Gabriel), as his birth was 10 days before the Synaxis of the Archangel Gabriel, celebrated on 13 July in Slavic Orthodoxy. He was a sickly child, and his parents followed the traditional practice of the era and "baked the baby" («перепекание ребенка») — an ancient ceremony in which sickly or premature babies are placed on a bread peel and put in and out of the oven three times.

Derzhavin's father was transferred to Yaransk and then Stavropol. Two more children were born, a boy and a girl, although the latter died young. 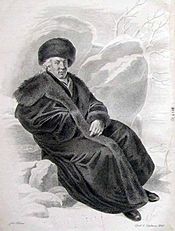 Derzhavin is best remembered for his odes, dedicated to the Empress and other courtiers. He paid little attention to the prevailing system of genres, and many a time would fill an ode with elegiac, humorous, or satiric contents. In his grand ode to the Empress, for instance, he mentions searching for fleas in his wife's hair and compares his own poetry with lemonade.

Unlike other Classicist poets, Derzhavin found delight in carefully chosen details, such as a colour of wallpaper in his bedroom or a poetic inventory of his daily meal. He believed that French was a language of harmony but that Russian was a language of conflict. Although he relished harmonious alliterations, sometimes he deliberately instrumented his verse with cacophonous effect. 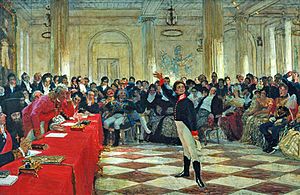 According to D.S. Mirsky, "Derzhavin's poetry is a universe of amazing richness; its only drawback was that the great poet was of no use either as a master or as an example. He did nothing to raise the level of literary taste or to improve the literary language, and as for his poetical flights, it was obviously impossible to follow him into those giddy spheres." Nevertheless, Nikolai Nekrasov professed to follow Derzhavin rather than Pushkin, and Derzhavin's line of broken rhythms was continued by Marina Tsvetaeva in the 20th century.

All content from Kiddle encyclopedia articles (including the article images and facts) can be freely used under Attribution-ShareAlike license, unless stated otherwise. Cite this article:
Gavrila Derzhavin Facts for Kids. Kiddle Encyclopedia.