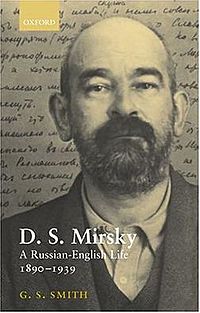 Bookcover of the biography of Dmitry Mirsky

D. S. Mirsky is the English pen-name of Dmitry Petrovich Svyatopolk-Mirsky (Russian: Дми́трий Петро́вич Святопо́лк-Ми́рский), often known as Prince Mirsky (9 September [O.S. 22 August] 1890 – c. 7 June 1939), a Russian political and literary historian who promoted the knowledge and translations of Russian literature in Britain and of English literature in the Soviet Union. He was born in Kharkov Governorate and died in a Soviet gulag near Magadan.

Mirsky saw service in the Russian army during World War I and joined the White movement as a member of Denikin's staff.

Mirsky emigrated to Great Britain in 1921. While teaching Russian literature at the University of London, Mirsky published his landmark study A History of Russian Literature: From Its Beginnings to 1880. Vladimir Nabokov has called it "the best history of Russian literature in any language including Russian". This work was followed with the Contemporary Russian Literature, 1881–1925,.

Mirsky was a founding member of the Eurasia Movement and the chief editor of the periodical Eurasia, his own views gradually evolving toward Marxism. He also is usually credited with coining the term National Bolshevism. In 1931, he joined the Communist Party of Great Britain and asked Maxim Gorky if he could procure his pardon by Soviet authorities. The permission to return to the USSR was granted him in 1932. On seeing him off to Russia, Virginia Woolf wrote in her diary that "soon there'll be a bullet through your head".

Mirsky returned to Russia in September 1932. Five years later, during the Great Purge, Mirsky was arrested by the NKVD. Mirsky's arrest may have been caused by a chance meeting with his friend, the British historian E. H. Carr who was visiting the Soviet Union in 1937. Carr stumbled into Prince Mirsky on the streets of Leningrad (modern Saint Petersburg, Russia), and despite Prince Mirsky's best efforts to pretend not to know him, Carr persuaded his old friend to have lunch with him. Since this was at the height of the Yezhovshchina, and any Soviet citizen who had any unauthorised contact with a foreigner was likely to be regarded as a spy, the NKVD arrested Mirsky as a British spy. He died in one of the gulag labour camps near Magadan in June 1939 and was buried on the 7th of that month. He was rehabilitated in 1962. Although his magnum opus was eventually published in Russia, Mirsky's reputation in his native country remains sparse.

Korney Chukovsky gives a lively portrait of Mirsky in his diary entry for 27 January 1935:

I liked him enormously: the vast erudition, the sincerity, the literary talent, the ludicrous beard and ludicrous bald spot, the suit which, though made in England, hung loosely on him, shabby and threadbare, the way he had of coming out with a sympathetic ee-ee-ee (like a guttural piglet squeal) after each sentence you uttered—it was all so amusing and endearing. Though he had very little money—he's a staunch democrat—he did inherit his well-born ancestors' gourmandise. His stomach will be the ruin of him. Every day he leaves his wretched excuse for a cap and overcoat with the concierge and goes into the luxurious restaurant [of the Hotel National in Moscow], spending no less than forty rubles on a meal (since he drinks as well as eats) plus four to tip the waiter and one to tip the concierge.

All content from Kiddle encyclopedia articles (including the article images and facts) can be freely used under Attribution-ShareAlike license, unless stated otherwise. Cite this article:
D. S. Mirsky Facts for Kids. Kiddle Encyclopedia.