The Lumière brothers, Auguste Marie Louis Nicolas; 19 October 1862 – 10 April 1954) and Louis Jean; 5 October 1864 – 7 June 1948), were among the first filmmakers in history. They patented an improved cinematograph, which in contrast to Thomas Edison's kinetoscope allowed simultaneous viewing by multiple parties.

The Lumière brothers were born in Besançon, France, to Charles-Antoine Lumière (1840–1913) and Jeanne Joséphine Costille Lumière, who were married in 1861 and moved to Besançon, setting up a small photographic portrait studio where Auguste and Louis were born. They moved to Lyon in 1870, where son Edouard and three daughters were born. Auguste and Louis both attended La Martiniere, the largest technical school in Lyon.

Their father Charles-Antoine set up a small factory producing photographic plates, but even with Louis and a young sister working from 5 a.m. to 11 p.m. it teetered on the verge of bankruptcy, and by 1882 it looked as if they would fail, but when Auguste returned from military service the boys designed the machines necessary to automate their father's plate production and devised a very successful new photo plate, 'etiquettes bleue', and by 1884 the factory employed a dozen workers. 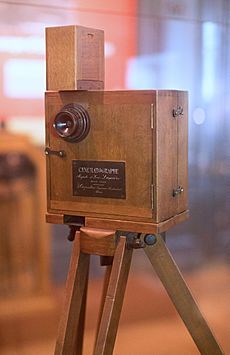 When their father retired in 1892 the brothers began to create moving pictures. They patented several significant processes leading up to their film camera, most notably film perforations (originally implemented by Emile Reynaud) as a means of advancing the film through the camera and projector. The original cinématographe had been patented by Léon Guillaume Bouly on 12 February 1892.

The brothers patented their own version on 13 February 1895. The first footage ever to be recorded using it was recorded on 19 March 1895. This first film shows workers leaving the Lumière factory.

The Lumière brothers saw film as a novelty and had withdrawn from the film business in 1905. They went on to develop the first practical photographic colour process, the Lumière Autochrome. 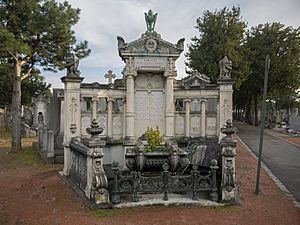 Louis died on 6 June 1948 and Auguste on 10 April 1954. They are buried in a family tomb in the New Guillotière Cemetery in Lyon. 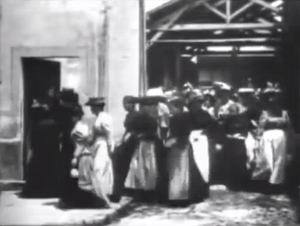 All content from Kiddle encyclopedia articles (including the article images and facts) can be freely used under Attribution-ShareAlike license, unless stated otherwise. Cite this article:
Auguste and Louis Lumière Facts for Kids. Kiddle Encyclopedia.