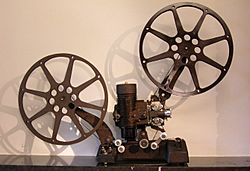 A movie projector is a machine that shows moving pictures by projecting them on a projection screen. Most of the optical and mechanical elements, except for the illumination and sound devices, are present in movie cameras. 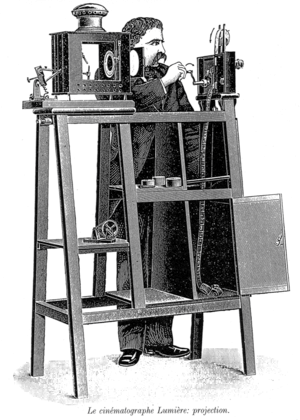 The cinématographe Lumière in projection mode.

Simulation of a spinning zoopraxiscope 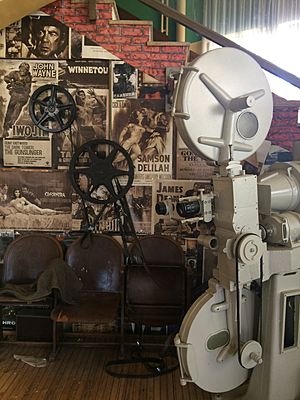 An early projector and seats from a movie theater

The first movie projector was the Zoopraxiscope, invented by British photographer Eadweard Muybridge in 1879. The zoopraxiscope projected images from rotating glass disks in rapid succession to give the impression of motion. The stop-motion images were initially painted onto the glass, as silhouettes. A second series of discs, made in 1892–94, used outline drawings printed onto the discs photographically, then colored by hand.

Kazimierz Prószyński (4 April 1875 – 13 March 1945), born in Warsaw, Poland, was a Polish inventor active in the field of cinema. He patented his first film camera, called Pleograph (in Polish spelling: Pleograf), before the Lumière brothers, and later went on to improve the cinema projector for the Gaumont company, as well as invent the widely used hand-held Aeroscope camera.

A more sophisticated movie projector was invented by Frenchman Louis Le Prince while working in Leeds. In 1888 Le Prince took out a patent for a 16-lens device that combined a motion picture camera with a projector. In 1888, he used an updated version of his camera to film the first ever motion picture, the Roundhay Garden Scene. The pictures were privately exhibited in Hunslet.

The Lumière brothers invented the first successful movie projector. They made their first film, Sortie de l'usine Lumière de Lyon, in 1894, which was publicly screened at L'Eden, La Ciotat a year later. The first commercial, public screening of cinematographic films happened in Paris on 28 December 1895. The cinematograph was also exhibited at the Paris Exhibition of 1900. At the Exhibition, films made by the Lumière Brothers were projected onto a large screen measuring 16 by 21 meters (approximately 52.5 x 69 feet).

All content from Kiddle encyclopedia articles (including the article images and facts) can be freely used under Attribution-ShareAlike license, unless stated otherwise. Cite this article:
Movie projector Facts for Kids. Kiddle Encyclopedia.