Bledsoe's Station, also known as Bledsoe's Fort, was an 18th-century, fortified, frontier, white settlement located in what is now Castalian Springs, Tennessee. The fort was built by long hunter and Sumner County pioneer Isaac Bledsoe (c. 1735–1793) in the early 1780s to protect Upper Cumberland settlers and migrants from hostile Native American attacks. While the fort is no longer standing, its location has been verified by archaeological excavations. The site is now part of Bledsoe's Fort Historical Park, a public park established in 1989 by Sumner County residents and Bledsoe's descendants.

Bledsoe's Station was one of a series of frontier outposts built in the Upper Cumberland during the first major migration of Euro-American settlers into the Middle Tennessee area following the American Revolution. The fort was a convenient stopover along Avery's Trace—the main road connecting East and Middle Tennessee at the time. The flood of settlers into the region brought inevitable conflict with the region's Native American inhabitants, and dozens of settlers were killed in the late 1780s and early 1790s. Isaac Bledsoe's brother Anthony was killed in an ambush at the fort in 1788, and Isaac was killed while tending a field outside the fort in 1793. The end of the Cherokee–American wars, the following year, ended much of the violence in the region and reduced the fort's necessity.

Bledsoe's Fort Historical Park protects the fort's excavation site, as an outline of the fort's walls can be discerned from former excavation trenches, as well as several historic structures, including the Nathaniel Parker Cabin and Hugh Rogan Cottage, who were compatriots of Isaac Bledsoe and a pioneer cemetery, with a large obelisk, dedicated to the Bledsoe brothers. The Castalian Springs Mound Site and the Wynnewood State Historic Site are located immediately east of the park, and the Cragfont State Historic Site is located immediately to the west.

Bledsoe's Station was located on a hill slope between Bledsoe Creek to the west and Bledsoe Lick Creek to the east. Both streams empty into the Old Hickory Lake impoundment of the Cumberland River just over a mile to the south. The hill is relatively blunt and consists of open fields alternating with densely forested areas. The top of the hill is used as a flying zone for radio-controlled airplanes. The spring that furnished the minerals for Bledsoe's Lick flows at the base of the hill a few hundred yards east of the fort site.

Bledsoe's Fort Historical Park covers most of the hill between the Sumner County RC Flyers airfield and Rock Springs Road. Tennessee State Route 25, also, known as, Hartsville Pike, provides the park's southern boundary and main access. The park is roughly halfway between Hartsville, to the east and Gallatin to the west, and lies approximately 35 miles (56 km) northeast of Nashville. 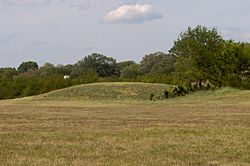 For thousands of years, the mineral springs at Bledsoe's Lick attracted buffalo and other large animals, and subsequently drew Native American hunters to the area. Native Americans were hunting around Bledsoe's Lick as early as 12,000 years ago during the Paleo-Indian period, and camped sporadically in the area throughout the Archaic (8000-1000 BC) and Woodland (1000 BC - 1000 AD) periods. During the Mississippian period (c. 1000–1450 AD), a substantial village had been established at the Castalian Springs Mound Site, a few hundred yards from the mineral springs. The village covered 40 acres (0.16 km2) and contained at least 12 mounds. By the time, the first Euro-American explorers arrived in the area in the mid-18th century, the Cherokee, Chickasaw, and Creek claimed the area as a hunting ground.

In the late 1770s, longhunter and explorer, Thomas "Bigfoot" Spencer led a hunting expedition, that camped near Bledsoe's Lick. Spencer remained throughout 1778, spending the winter in a hollowed-out sycamore tree, just south of the mineral springs. Spencer spent much of the year building cabins in the area, believing (mistakenly) that if he constructed cabins on certain tracts of land, he could lay claim to these tracts. 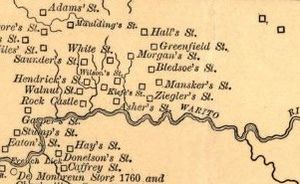 Map of the Upper Cumberland frontier

The Bledsoe brothers, Isaac and Anthony, were born in Virginia in the early 1730s. Anthony Bledsoe, the older of the two, served in the French and Indian War and in various capacities with the Virginia militia. He commanded Fort Patrick Henry at Long Island of the Holston in 1776 and was elected to the Virginia House of Delegates the following year. Isaac Bledsoe also served in the French and Indian War, and following the long hunting excursions of the early 1770s, Bledsoe joined William Christian's 1776 punitive expedition against the Cherokee. In 1779, North Carolina appointed Anthony Bledsoe to lead a surveying party to Middle Tennessee. Isaac Bledsoe followed in 1781.

Isaac Bledsoe probably began building Bledsoe's Station, shortly after his arrival, although, he didn't move his family, into the fort until 1783. Around the time Bledsoe's Station was completed, Anthony Bledsoe completed a fort at Greenfield 2.5 miles (4.0 km) north of Bledsoe's Station. As settlers poured into the Upper Cumberland region, conflict with the region's Native American inhabitants intensified. The Chickamaugas— a renegade branch of the Cherokee— had for the most part been at war with the United States since 1776, and opposed land concessions that would allow Euro-American settlers to move into the Middle Tennessee area permanently. In 1782, frontiersman Hugh Rogan (1747–1814) was nearly killed in an ambush in the vicinity of what is now Cragfont. A hunting party led by Thomas Spencer was attacked at Drake's Creek in 1784. Spencer survived, but was later killed in an ambush near Crab Orchard. In 1786, Anthony Bledsoe wrote a letter to North Carolina governor Richard Caswell reporting that 14 settlers had been killed that year and sought permission to attack the Chickamaugas. A schoolmaster named George Hamilton was shot and badly wounded at Bledsoe's Station in 1787. As attacks increased, Anthony Bledsoe moved his family from Greenfield to Bledsoe's Station, which afforded better protection, but in 1788 he was shot and mortally wounded when he accidentally stepped into a section of the fort vulnerable to hostile fire. During the engagement, Hugh Rogan— who was in the fort at the time— volunteered to try to sneak to a nearby fort to obtain means for making a fire and providing light by which the dying Bledsoe could draw up a will.

Conflict between the Chickamaugas and the Upper Cumberland settlers continued into the early 1790s. Ziegler's Fort (at what is now Bledsoe Creek State Park a few miles southwest of Bledsoe's Lick) was overrun in 1792, and Morgan's Station (northwest of Bledsoe's Lick) was nearly burned a few months later. In 1793, Isaac Bledsoe was shot and killed while walking through a field near Bledsoe's Station. The following year, a son of Anthony Bledsoe (named Anthony) and a nephew of Anthony and Isaac (also named Anthony) were both ambushed and killed near Rock Castle at what is now Hendersonville. Thomas Bledsoe, another son of Anthony Bledsoe, was ambushed and killed a few months later. Hostilities between the settlers and the Chickamaugas finally subsided when the 1794 Treaty of Tellico brought an end to the Cherokee–American wars. 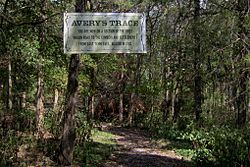 Sign marking what was once a section of Avery's Trace

The first major road connecting the Upper Cumberland region with settlements to the east, known as Avery's Trace, was completed in 1788. The road, which connected Fort Southwest Point with Nashville, passed a few hundred feet east of Bledsoe's Station. Guests at Bledsoe's Station in the 1790s included French botanist André Michaux and Louis-Philippe, Duke of Orléans and later king of France. General James Winchester, who helped establish Cairo to the southwest and was later instrumental in the founding of Memphis, purchased Bledsoe's Station in 1797. The following year, Winchester completed Cragfont near Bledsoe Creek about a mile to the west. In 1807, a pioneer from North Carolina named Jeremiah Belote (d. 1822) purchased Bledsoe's Lick, and his descendants would retain possession of the property for several decades.

Following Winchester's death in 1826, his daughter, Almira Wynne, inherited what is now the Wynnewood State Historical Site. Wynnewood— the largest extant log structure in the state— was completed in 1830 and operated as an inn. During this period, the Winchester family also managed to change the name of Bledsoe's Lick to "Castalian Springs", the name being derived from the spring of mythological importance near Delphi in Greece. Castalian Springs thrived sporadically, as a health resort until 1914. The Bledsoe's Station site was purchased by Sumner County in 1989.

Bledsoe's Fort Historical Park consists of approximately 80 acres (0.32 km2), and includes the Bledsoe's Station site and several other features important to the early history of the Upper Cumberland region. The park is owned by Sumner County and maintained by the Bledsoe's Lick Historical Association. A short loop trail— part of which follows a section of Avery's Trace— provides access to the fort site and other features. 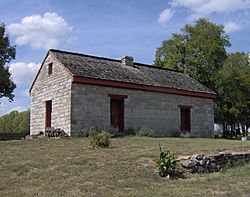 All content from Kiddle encyclopedia articles (including the article images and facts) can be freely used under Attribution-ShareAlike license, unless stated otherwise. Cite this article:
Bledsoe's Station Facts for Kids. Kiddle Encyclopedia.